Cesar Montano is happy with his ‘blended family’: ‘Everything feels right’

After years of tension with his children and ex-wife Sunshine Cruz, Cesar Montano is now able to breathe easy knowing that his blended family setup is finally working out. 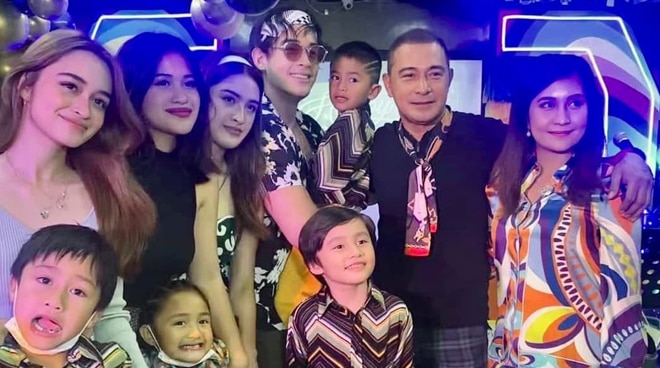 It is no secret that actor Cesar Montano had been at odds with his family for several years.

Cesar is father to actor Diego Loyzaga, his son with actress Teresa Loyzaga. For quite a long time, there was friction between father and son, and it only fairly recent that they were able to make amends.

Cesar was also estranged from former wife Sunshine Cruz, with whom he has three daughters: Angelina, Sam, and Chesca. Sunshine and Cesar married in 2000, separated in 2013, and the marriage was finally annulled in 2018.

After years of strained relationships, Cesar and his children have seemingly regained their familial bonds. Surprisingly, their mothers are also on good terms and treat each other as family. When Diego and Cesar finally reconciled, both Sunshine and Teresa were happy for them.

Since then, Cesar has been seen bonding with his kids. Their family was complete in recent gatherings, including the current partner of Cesar, Kath Angeles.

During the 18th birthday of Sam, Sunshine posted a message of gratitude for their family.

She even gave a shout out to Kath.

"Thank you Kath for being a wonderful Tita to my girls, I/we appreciate you! My girls love your kids so much,” she added.

In a recent family trip to Anilao, Sunshine and Kath were seen chatting with each other.

“If only I could have eavesdropped, because most likely, ako ang topic nila,” commented Cesar. “Kidding aside, it happened in God’s perfect time, so everything feels right. There’s no awkwardness at all.”

Meanwhile, the one who was not present was Macky Mathay. He was Sunshine’s partner for a while, though there have been talk about the two already having gone their separate ways after Sunshine posted quotes about letting go.

In respect to Sunshine, Cesar chose not to say anything on the matter.

“I am in no position to comment on that since it’s their story and not mine,” said Cesar.

What he did say was that he only wishes happiness for his former wife.

“Whatever Shine is going through, I wish her well,” said Ceasr. “ I want her to be happy because her happiness will rub off on our daughters.”

Cesar takes his renewed friendship with Sunshine as a blessing. His advice for those who find themselves in a similar situation: don’t force it.

“Leave it all to God to pave the way for reconciliation,” said Ceasr. “Forgiveness comes easy when you let friendship prevail.”