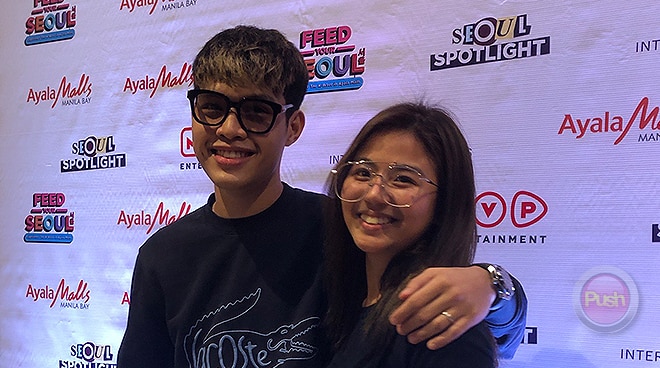 After revealing their relationship status last May, Elijah Canlas and Miles Ocampo were spotted together once again as they attended the opening night of Seoul Spotlight which is Ayala Malls Cinemas’ Korean Film Festival which runs until September 27. The festival started on September 20 with a special screening of director Park Chan-Wook’s film Decision to Leave which is South Korea’s official submission to the 2022 Cannes Film Festival.

“I’m a big fan of Park Chan-Wook from Old Boy, Handmaiden, and a bunch of other Korean filmmakers so super excited to be here tonight. Si Miles fan naman siya ng K-dramas. I heard that Park Chan-Wook delivered again and grabe yung buzz around the international film market so I’m super excited talaga,” Elijah shared. Miles revealed that she was more of a K-drama fan but is starting to appreciate their films more because of Elijah’s influence.

Both currently busy with their individual projects which include Elijah’s teleserye Suntok Sa Buwan with Aga Muhlach and Maris Racal and an upcoming movie set for release this year for Miles, the couple said they also want to work together on and offscreen by writing their own script.

Having grown up in showbiz as a former child actress from Goin’ Bulilit, Miles shared what made her say yes to dating Elijah who is four years her junior.

When asked what he likes most about Miles, Elijah said he appreciates everything about her.

“Everything. Totoo yun. Everything. I guess, I don’t know. I guess just being honest and transparent and overall just appreciating everything that she has and who she is,” he explained.

Miles and Elijah first worked together in 2020 on the TV5 drama series Paano Ang Pangako. They were also paired together in the music video of Over October's hit single "Sandali Lang", which was released in October last year. Elijah confirmed their relationship status last May during an interview with showbiz reporter and vlogger Ogie Diaz.