Michele Gumabao proves that she still has it. 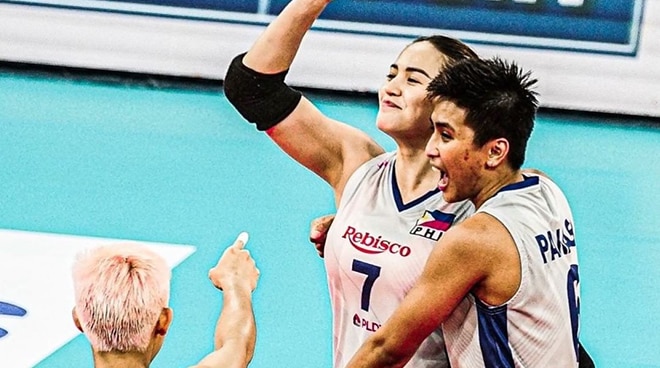 The Philippine Women’s National Volleyball Team clinched its first win in the ongoing AVC Cup 2022 which is being held in the country. Former beauty queen and Pinoy Big Brother housemate Michele Gumabao was one of the key factors for the win in the match against Iran.

Michele tallied 13 big points to help her team win the match. On her Instagram, the volleyball player shared how thankful she is for everyone who supported the team from the start.

READ: Boy Abunda asks Michele Gumabao: ‘What is your truth?’

“We play with no pressure but with pride for the Philippines na ilalaban namin to hanggang sa dulo so every single game talagang bibigay lang namin yung best namin,” she said in a post-game interview.

Her team, Creamline Cool Smashers,  had the chance to represent the country after winning the 2022 Premier Volleyball League Invitational Conference.

READ: Michele Gumabao explains why she was not present at ‘ASAP: Natin ‘To’ with MUP beauty queens

Prior to becoming a beauty queen, Michele was a volleyball player first as she represented De La Salle University in the UAAP wherein she was hailed as the Best Blocker for two consecutive seasons. She also unsuccessfully ran for public office with celebrity vlogger Mocha Uson in the recent national elections under the MOCHA party-list.

Former PBB housemate Alyssa Valdez, who was geared up to represent the country, had to beg off the whole tournament as she got dengue days prior to the event. Her teammates have been filling up the important spot that she left on the team.

Meanwhile, the group will be meeting one of the world’s top ranked teams, South Korea, who has yet to see a win in the tournament. If team Philippines wins, they will secure a spot in the quarterfinals.