Boy Abunda asks Michele Gumabao: ‘What is your truth?’ 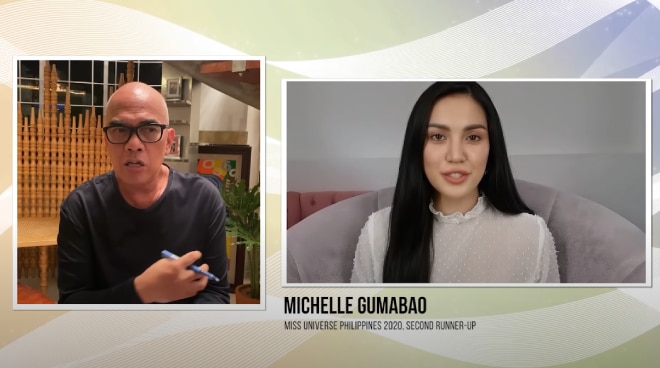 The television host recently attempted to understand the beauty queen's side in a video posted on his YouTube channel, "The Boy Abunda Talk Channel."


"Some weeks ago, Michele Gumabao spoke up via a video statement about her side of the story on the Miss Universe Philippines 2020 controversy. She was one of the Top 5, which meant that anyone of them could've won the crown. Ang daming naririnig. Ang daming sinasabi. But we didn't hear Michele's side of the story. So I was extremely interested," he said.

However, after going through each statement, Boy admitted that he was left with even more questions, such as why Michele was not in the photo of the Top 5 winners, what she heard at "3 a.m. on October 25," what the rumors on "October 23 and 24," as well as "cryptic" text messages she received were, and the reason she gave before leaving the pageant venue.

"What did you even tell the winner so that we will understand better? Why did you expect the organizers to speak on your behalf when you, at this point, who had the chance to explain and to tell us your side of the story, is obviously choosing not to tell us the story? You have this chance," he said.

"Were you cheated? Again, at 3 in the morning of October 25, what did you hear? Was the contest rigged? Was there favoritism? What happened?" he went on. "What is your truth, Michele? What is your experience? What is your story? Michele, what?"

READ: Michele Gumabao explains why she was not present at ‘ASAP: Natin ‘To’ with MUP beauty queens

Michele, 28, finished second runner-up in the inaugural Miss Universe Philippines pageant, which was won by Rabiya Mateo from Iloilo City.