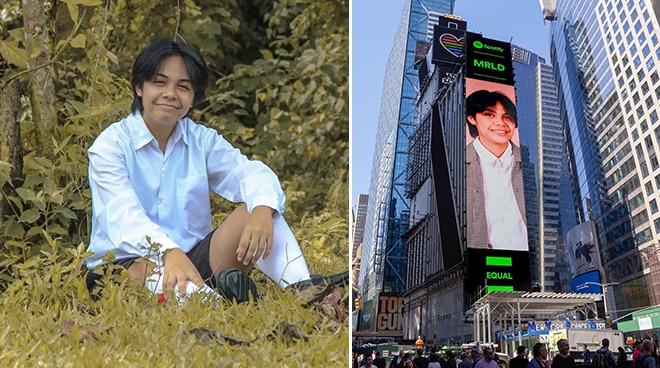 Joining the growing list of Pinoy artists who have found themselves on a New York Times Square billboard like Belle Mariano, KZ Tandingan, Ylona Garcia, and Kiana Valenciano is teen singer mrld (real name Meriel de Jesus) who was discovered and signed by OC Records founder and CEO Kean Cipriano.

In her latest Instagram post, the 17-year-old artist shared the good news with her followers online. She wrote, “EVERYONE MY FACE IS IN NEW YORK TIME SQUARE

way back 2020 I remember telling my mom about my artist photos, ‘I need to have good photos mom. you’ll never know, maybe I’ll be on time square one day.’ and we all just laughed knowing it was just impossible. and now it actually happened. wow my heart is full.

“thank you to @ocrecordsph @kean and @chynsortaleza for helping and believing in me. to my wrld, I wouldn’t be anywhere if it weren’t for all of you :”) I’m still 17 and having all these achievements at this age is just unbelievable. thank you everyone. this is just the start of it all. I used to dream about stuff like this. thank you for making a kid’s dream come true. all the love x.”

READ: ‘Is this for real?’: Ylona Garcia gets billboard at New York’s Time Square

Kean and his wife Chynna Ortaleza also congratulated their talent in the comments section of the post. Kean wrote, “Proud of you @mewyel! Congratulations!!” while Chynna wrote, “iyak ako kanina! :) we love you @mewyel   ”

On the OC Records official Instagram account, they congratulated her with a post saying, “ Congratulations, @mewyel for being the first OC artist on Times Square Billboard in NYC!   Your OC family is very proud of you! We can't wait to see more of what life has in store for you!  .”

Last May 20, mrld released her latest single “Maligayang Pagkunwari” which has already reached a million streams.

On Spotify’s website, on the singer’s profile it  says, “For mrld, music is not just about iconic melody, lyrics, and it's whereabouts—it's about how you express every detail of scenery that your mind creates. The singer-songwriter from the Philippines etched a part of acoustic pop and mellow; that talks about emotions. Meriel de Jesus—also known as mrld, is looking forward to releasing more of pop music, since her mind is very flexible when it comes to different genres.

“Fans have witnessed how Meriel has grown as an artist from a kid who covers on social platforms, to writing her own songs—releasing them on huge music platforms. Starting from small waves of people to capturing a crowd of attention since the pandemic started, she was given an opportunity to get recognition.

“Music for de Jesus is not just about recognition and fame; it's about how she connects with people's emotions through her songs without it being direct. Using metaphors and hit lines to strike people's attention with every word she plots in her songs. ‘I want people to know me because I marked their hearts with songs that I was capable of writing. Hence my lack of experience in life, I want to portray as if I am someone who's wise enough to tell my own story.’”

"Knowing that most of the people that know me are also dreaming to be where I am right now, despite the small achievements I have, I want to prove it to them that starting at the age of 14 will do you no harm at all, and that everything takes time," her profile added.