Sharon Cuneta is excited to do a concert again with Regine Velasquez: ‘I really look up to her as a singer’

‘Iconic’ singer Sharon Cuneta talks about preparing for the kickoff concert for her 2022 US Tour with Regine Velasquez. 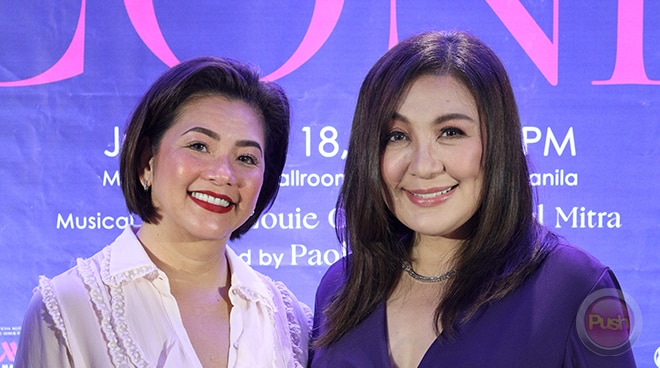 Three years after their sold out concert in 2019, Sharon Cuneta said she is excited to be returning onstage again in June for this year’s Iconic concert with Regine Velasquez.

“Repeat ito ng Araneta (Coliseum) concerts with a couple of changes. It’s actually parang a kickoff for our US concert tour in July. Actually we were told there were tour groups from Guam who are flying in just to watch us dito sa Marriott. Those that missed Iconic the first time around sa Araneta Coliseum can get a more intimate experience with us here because the Grand Ballroom holds around 3,000 people as compared to Araneta Coliseum which holds 15,000. So it’s more intimate, we’re more up close a little bit, and when we’re on stage we’re just ourselves so we’re looking forward to having a lot of fun with our audiences,” she said during the Iconic concert presscon held last April 18 at the Marriott Hotel Manila in Pasay City.

Sharon admitted she and Regine both missed performing in front of a live audience even though they continued to entertain their fans online during the pandemic.

“I’m excited because when I’m with Regine onstage, parang comfort zone because I’m with someone I trust because she’s a very generous co-performer. For me she is the best and she shares that light with you. Yung kaya ka niya kainin ng buong buo pero hindi niya ginagawa. Because I’m alto and she’s soprano. Which makes for a very interesting performance and cute pag nag-blend na yung mababa at mataas. I love working with Regine. We’re the same that we get our energy when we perform from our audience. I did a Mother’s Day concert online for an ABS-CBN fundraiser and it really was so different. Parang hindi mo mabigay yung gusto mong ibigay kasi hindi mo makita, yung walang energy to feed off of. So we’re looking forward to that ngayon na open na ang lahat. You can’t compare talaga. When you’re performing, all that energy na hindi mo nahahawakan pero nandun, that’s directed towards you,” she admitted.

With her Iconic co-performer turning 51 years old later this month, Sharon shared her birthday wish for Regine during the presscon.

“I just want her happiness to be never ending because she’s so happy lalo na kay Ogie (Alcasid), kay Nate. Her family life is fantastic and really blessed. And career wise, what else can she do that she hasn’t done already? Sa career niya, I just wish na hindi siya huminto. Because she set the standard for everyone, lahat ng mga bagong singers na sumasali sa concerts ngayon, sa mga contests ngayon. Parang nag peg lagi si Regine. Even me when I was a coach and a judge on The Voice Kids before, parang pag tumutunog Regine, bumibigat yung feeling na iikot ba ako or hindi, kasi parang if I want to hear someone sounding like Regine, I really would rather listen to Regine herself kasi siya yung peg ng lahat. Although she’s such a good influence on them. We have so many good singers but there’s nothing like the original. I’m just blessed that she’s also my friend. I really look up to her as a singer,” she said.

The Iconic concert performer also revealed how she will prepare for her concert even with all her showbiz and political commitments these past few months.

“Everyone knows I’ve been campaigning and in between those days I tape for FPJ’s Ang Probinsyano in Ilocos Sur so it’s been very hectic, close to toxic of a schedule for me. Halos wala ng time to do anything else. Because the spare time that I get, I have to spend with my children of course. I have missed singing very much kasi wala akong weekly show unlike before unlike Regine. So napahinga yung boses ko masyado in the three years halos na wala akong concerts. So parang I’m starting over again. It’s like a muscle that hasn’t really been worked out. So I have to do all these vocalizations again and singing again just to wake all the chords up again,” she revealed.