Singer and actress Gigi De Lana fulfills her dream of visiting the Disneyland theme park for the first time. 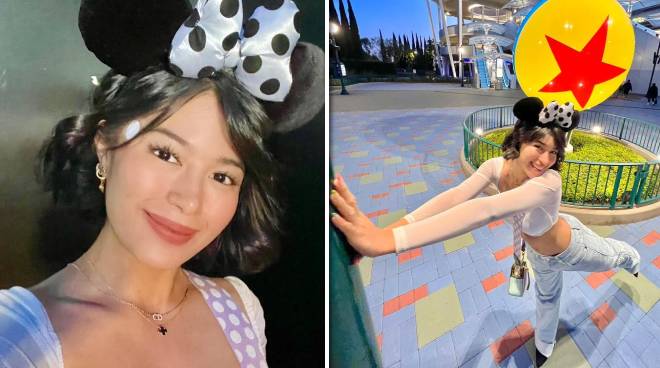 Currently in the US with her band Gigi Vibes for a series of performances, singer and actress Gigi De Lana shared what she did during their down time one day when she visited one of the most famous theme parks in the world, Disneyland in Anaheim, California. The pretty Olongapo-born artist wore a sexy white cropped top along with a furry Minnie Mouse ears headband.

While enjoying the popular ride attractions, Gigi ran into another Pinoy singer at the park and struck a playful pose with Martin Nievera. She wrote, “Look who I just bumped into! I love youuu!  nose bleed pa din ako sa inyo hahaha #english  “

Having made her way into showbiz as a Tawag ng Tanghalan contestant, Gigi was finally signed up by Star Magic and Rise Artists Studio last year. She last starred in the iQiyi drama series Hello Heart starring opposite Gerald Anderson.