Darren Espanto shares how Zack Tabudlo wrote a new song for him. 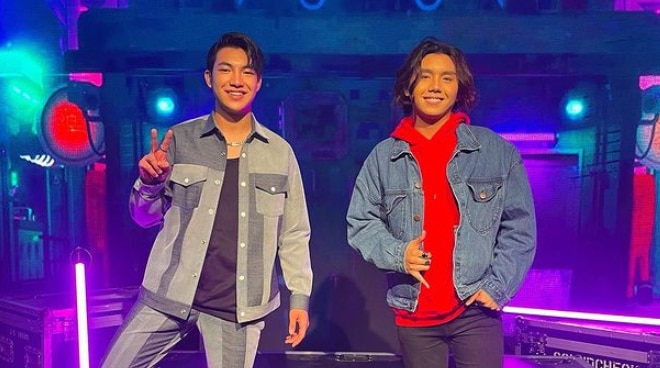 Even before making their recent YouTube live performance of “Binibini” which was released last June 6, Darren Espanto said he was happy to collaborate with fellow The Voice Kids alumni Zack Tabudlo for his single “Tama Na” released last month.

“Zack and I we’re from the same batch. We’re both from season 1 of The Voice Kids. I was from Team Sarah, he was on Team Bamboo and we’ve just been friends ever since. I just love his music, the way he writes and talagang I told him one day I hope we could work on a song and he said one day he wants to make a song for me. And then he finally became a part of the MCA music family and we’re like yes we can finally work together,” he shared in a radio interview with Monster RX93.1 earlier this month.

READ: Darren Espanto on staying in Canada last year: ‘It made me reconnect with my roots’

Darren, who is also excited for his Darren Home Run: The Comeback Concert happening on June 19 and 20, said they finished working on “Tama Na” last year when he was still in Canada.

“He wrote this song in like a day lang ata and then he produced the instrumental and everything in another day so two days in the making lang itong ‘Tama Na’ and when he sent the demo I was like, ‘Oh my gosh, it’s such a good song.’ I was so excited to record it right away. We recorded ‘Tama Na’ last year and that was on Zoom,” he added.

READ: Darren Espanto shares his ligaw style: ‘I would court the parents first’

Coming a long way from first meeting as contestants on The Voice Kids, Darren said Zack (who is two years younger) helped coached him for the vocal work on the single “Tama Na.”

“He was very helpful with everything talaga, from harmonies and even yung placement ko, the delivery of the vocals and stuff like that. It was a very good process I would say and interesting din. I haven’t sung like this in a single of mine before, na parang super breathy na yung placement parang hindi siya husky pero parang pabulong na ganun. So Zack taught me how to do those types of placement and he already knew what he wanted from me, like na-visualize na niya yung tunog na gusto niyang ibigay sa akin beforehand so I’m just happy that the song is finally out now after so many times that we tried releasing it and na-push ng na-push yung release date niya. I’m just so glad that it’s out now for everyone to hear. And I’m so glad that Zack had me interpret his song,” Darren explained.

READ: Darren Espanto on turning 20: ‘My look is a lot more mature now’

With his new concert and more mature image this year, Darren hopes to give his fans more things to look forward to in the coming months.

“Just from logo and my introduction, I even changed my moniker. I just have to live up to it and it’s working pretty well and I’m very thankful that people are accepting the new moniker as well. I’m just very excited for everyone to see what else we’ve been working on because it started from releasing my artist trailer to of course the single ‘Tama Na’ which is a very different sound from what I’ve released before and the comeback concert and the music video as well. So it’s very exciting things and I’d say my team and I are very excited with the response we’ve been getting from the people,” he said.