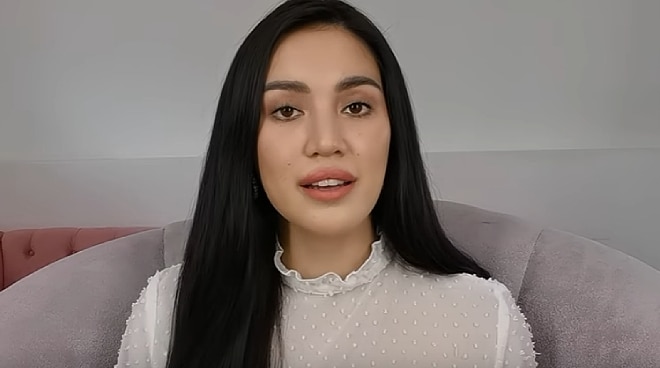 In the 25-minute video uploaded Monday, November 2, Michele, who finished third in the competition, addressed the rumors hounding the pageant --- which began after fellow candidate Sandra Lemonon claimed cheating was involved, and when a photo of the top five candidates, including winner Rabiya Mateo, but without her, went viral on social media.

“Because people have been trying to taint my name, and drag me down [with] so many issues that are not real and didn’t happen. I’m not sharing all this to attack anyone or to hurt anyone. I just want to share the truth. I want to share my story. I want to be true to myself, because I know that this will be the only way to look back at all this and happily move on," she explained.

The 28-year-old beauty queen then recalled figuring in an accident three days before she checked in at the pageant venue in Baguio City, which left her "depressed" and "devastated."

"Days leading up to the pageant, it was a Sunday, I think it was the 11th of October. I [was] so busy preparing for the pageant, and I didn't realize that I was exhausted and I was tired. I was busy handling businesses, work. I was catching up with all the brands that I had to work with... Everything just became too overwhelming that I didn't even realize. So, that day, I woke up and as I took my first steps, I passed out. I collapsed," she revealed.

"That day was so hard... I cut my head, I sprained my knee, I broke my toe... It was depressing for me. It was devastating for me. I spent the whole day in bed, I didn't know what to do. I decided to do my rehab and at home and to do whatever I could at home. I saw professional help, and so, come our check-in day, I was able to walk, and I was able to act like nothing happened," she said.

"We continued on to our activities," continued Michele. On October 24, after she and her fellow candidates filmed the preliminary competition and the coronation event, "[I] had the best night of my journey as a candidate and I had my best memory getting to bond with all the girls, getting to spend time with them because we weren't able to due to pandemic protocols," she said. "We were able to bond that night. I got a chance to get to know all the girls, and I was so thankful."

Michele said that during that night, she received "cryptic messages" from people regarding the results.

However, "early in the morning of the 25th, at around 3 a.m., I heard things that I wasn't supposed to hear."

"It hurt, I must admit," admitted Michele. "I went back to my room and I cried so hard... All these questions just came back to my head. Everything that I've been hearing for the past two days just came rushing in my head. I was heartbroken. I was devastated that night."

"I called my family and I wanted to go home. My car was waiting outside and I could have gone home. But they told me to think about it, that whatever I decide, they're supporting me 100%. They told me to pray. After that, I took their advice and I slept on it," she said, without revealing what exactly caused her "heartbreak."

Despite being heartbroken, Michele still decided to show up the following morning, upon the encouragement from a fellow candidate who made her realize her "purpose."

She went on: "I put on my makeup. I stood up. I got dressed. I smiled. I looked pretty and went down deliberately when it was already long gown. Top 16 was already walking for their long gown, and I knew that not so long, we would crown the winner and everything would be over, and I would be able to go home. So I went down, and for one last time, I told myself to smile for the show, for the cameras.

“News of the winner already leaked online, because the streaming, I think, it was more advanced than ours. But when I got down, I saw that our feed was so delayed, and it was only part of the announcement of the top 16.

"So many people came to me, and was hugging me and a lot of tears were happening around. So many questions of why, how, or what just overwhelming me too much. And after knowing what I knew the past two days, everything just came crashing down on me. I couldn't handle it. I admit I wasn't strong enough to handle that at that moment. I knew I was gonna break down. I knew I was gonna cry, and I didn't want to do that in front of the cameras."

She proceeded to explain why she was absent during the formal announcement of winners.

"I went to the production and I told them that it was too hard for me, that I can't stay here, and I told them that I really want to leave. Can we please fast forward the feed because they already announced online who the winner was and they said they can't because we have to finish the feed and we're filming and I said I can't do this, and I said can we please just finish and they told me they had to take the picture and I said can we just do it now and they said they couldn't, and I said I'm sorry that I had to leave, and I left," she said.

Michele said that upon finding out that IloIlo City's Rabiya was crowned Miss Universe Philippines 2020, she congratulated her and told her the reason why she left.

"She replied thank you. And after that, I thought everything was okay. I did my job. I did what I knew was right," she said.

According to Michele, she only knew of the rumors about the pageant when she arrived home.

"All the stories and all the issues that people were making up, I just couldn't believe it. I couldn't believe that people are capable of such things, that we're in this beauty pageant, joining because of our dreams, because we want to empower people but it's so toxic. The industry, the fans, the bashers, the criticism. I was not hurt," she said.

"I was not angry. But I was sad because so many girls just like me dream of this platform, dream of this position because we know it is meant for something good, but so much people who aren't even connected to the organization are just trying to tear everybody down. It just saddens me that in the midst of this pandemic, in the midst of a celebration such as the first ever Miss Universe Philippines, we... there are people who have it in their hearts to criticize and to spread rumors and to spread so much lies. I just couldn't take it," she added.

Michele said she decided to take a break from social media after a "very exhausting two weeks."

READ: ‘I can handle defeat': Michele Gumabao airs her side, expresses gratitude to supporters

The beauty queen ended by sharing her hope that future queens will have a better experience than she did during her stint in the pageant.

She added: "I also want to take this time to remind everybody that we should stop bashing. We should stop spreading lies and negativity... Even though we are free to speak our hearts and our minds and share our passions about a certain topic that it is okay to bring and take people down just because we feel bad."