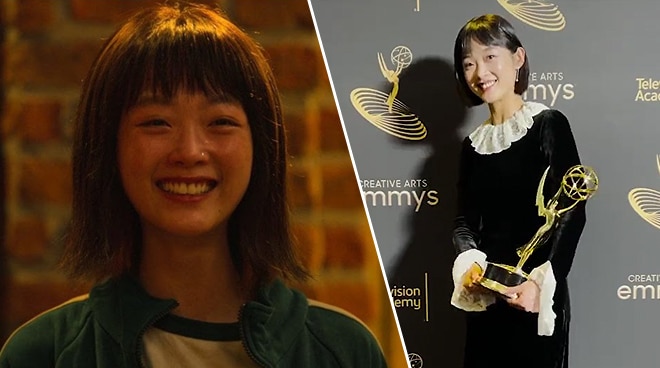 On Monday, September 5 (Philippine time), You-mi won the Emmys for Outstanding Guest Actress in a Drama Series for her performance in the "Gganbu" episode of Squid Game.

The Korean actress extended her gratitude to those who made her win possible during her acceptance speech.

"I’m so grateful. Thank you so much for giving me such a great award. I’m grateful to the Emmy Awards, and I love Netflix, who is always by my side, and I also love my agency VARO Entertainment. I'm so very happy! Thank you again," she said.

The Emmys did an interview with You-mi following her win.

When asked how it feels to win an Emmy, she replied: "I am so happy about it. I honestly can't believe it and I can't wait to go tell all my close friends and brag to them."

The Squid Game show also bagged several awards at the Emmys including Outstanding Special Visual Effects in a Single Episode, Outstanding Stunt Performance, and Outstanding Production Design for a Narrative Contemporary Program (One Hour or More).

In the series, You-mi played the role of Ji-yeong or Player 240, a young lady who was released from prison after killing her abusive stepfather.

Squid Game made history on Netflix as it set a new record for any series on the global streaming platform in its initial debut.

Netflix announced last October 2021 that the series reached 111 million fans since it was released on September 17, in just a span of 25 days.

In June this year, Netflix announced that the show has been renewed for a second season.

"As the writer, director and producer of 'Squid Game,' a huge shout out to fans around the world. Thank you for watching and loving our show," Director Hwang Dong-hyuk said in a statement in June.