Here’s what to expect in the second season of ‘Squid Game.’ 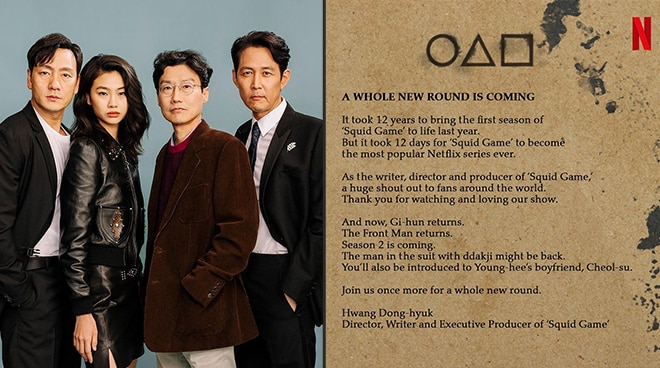 Netflix has announced that the Korean hit series Squid Game has officially been renewed for a second season.

The streaming giant posted a statement on social media from the series director Hwang Dong-hyuk on Monday, June 13, upon the announcement.

"A whole new round is coming. It took 12 years to bring the first season of 'Squid Game' to life last year. But it took 12 days for 'Squid Game' to become the most popular Netflix series ever," the director said in the statement.

He extended his gratitude to the fans of the show for making the show a success.

"As the writer, director and producer of 'Squid Game,' a huge shout out to fans around the world. Thank you for watching and loving our show," he stated.

Dong-hyuk then shared what fans could expect in the second season.

"And now, Gi-hun returns. The Front Man returns. Season 2 is coming. The man in the suit with ddakji might be back. You'll also be introduced to Young-hee's boyfriend, Cheol-su," he revealed.

"Join us once more for a whole new round," he added.

Fans were quick to express their excitement following the announcement.

"We look forward to the new release #squidgamenetflix," one fan said.

"'The man in the suit with ddakji might be back' YES YES PLS @gongyoo_official," another fan commented.

The first season of Squid Game became a global hit Netflix series. It tells the story of a group of people who join a survival game to win billions.

Squid Game made history as it set a new Netflix record for any series on the streaming platform in its initial debut.

Netflix announced in October 2021 that the series reached 111 million fans in a span of 25 days since it was released on September 17.

The show and its stars also received numerous nominations and awards.

O Yeong-su, who portrayed the role of Oh Il-nam, won at the 79th Golden Globe Awards for Best Supporting Actor and made history as the first Korean-born actor to win the award.

The show also won three awards at the 2022 SAG Awards including Outstanding Action Performance by a Stunt Ensemble.

Lead stars Jung-jae and Ho-yeon Jung won Most Outstanding Performance by a male and female lead respectively in a drama series at SAG.

"Thank you so, so much SAG Awards. And thank you to the global audience for all your love for Squid Game. And thank you Squid Game team," Jung-jae said in his speech after winning the award.

Meanwhile, Hae-soo remarked that winning the award was a dream come true especially that Squid Game is her first acting project.

"First and foremost, thank you so much. I have sat many of times watching you on the big screen dreaming of one day becoming an actor. I just want to say thank you so much. Thank you... made me dream and open the door for me. And I love you my Squid Game crew!" she said in her speech.