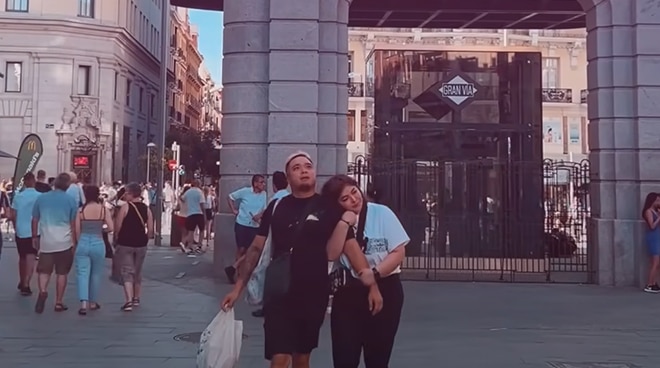 After flying out of the country in late June for their first international trip as a married couple, Angel Locsin and Neil Arce finally gave fans a glimpse of what their memorable trip in a vlog.

The couple shared the first part of their travel vlog titled “Angel and Neil Go to Madrid” uploaded on their YouTube channel.

The couple flew business class with a stopover in Dubai on their way to Spain. Angel’s mother-in-law Jean also joined them on the vacation.

On their first day in Madrid, their group walked around with Neil sharing their first observation.

“Hi guys, so medyo na-pa-praning kami ngayon kasi walang naka-mask. Pero pinagpipilian namin kung mag-ma-mask kami, nakakahiya so laban na,” he said. The couple also got lost on their way to the supermarket but were offered help by some fellow Pinoys in the city,” Neil said.

READ: Angel Locsin shows off new figure: ‘Love every inch of you’

In her vlog upload last July 23, Angel and Neil summed up their Madrid trip in the video caption. “Our first trip abroad as Mr. and Mrs. Arce!  We enjoyed a lot of walking, eating, drinking, light (promise!) shopping and all touristy activities in between.  Sharing with everyone our time in Madrid. Enjoy!”

In their first night in the city, the couple chose to eat in one of the restaurants that serves the best Mediterranean cuisine in the city called El Barril de las Cortes where they ordered jamon iberico, seared rock octopus with mild aoili, and pan-fried red shrimp with chili and garlic sauce. They also chatted with their Pinoy servernamed Erickson who had been living in Madrid with his family for the past 12 years.

For their second day in Madrid, the couple did a lot of sightseeing and errands. “Mga 10,000 steps na kami, two hours pa lang,” Neil revealed.

The couple also visited one of the oldest spots in the city like Plaza Mayor, The Royal Palacae of Madrid, Fabrica Nacional de Moneda Y Timbre which was one of the featured locations in the popular Spanish series Money Heist.

They also ate at restaurante Sobrino De Botin which is the oldest restaurant in the world according to the Guinness World Book of Records. It has been operational for almost 300 years now.

After eating out at various places, Angel admitted she couldn’t help but miss Pinoy food which led them to a place called El Torezzino Filipino.

It was in 2020 when the couple first started The Angel and Neil Channel.