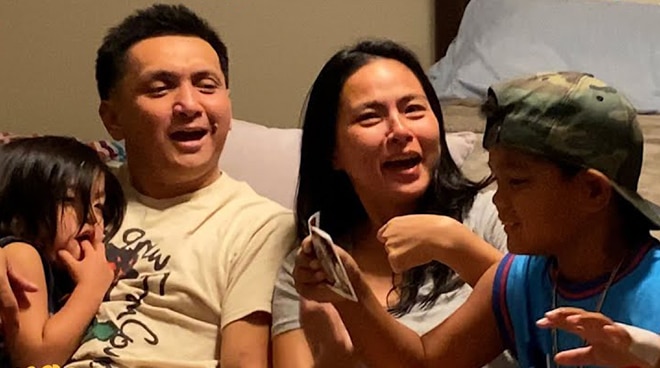 The couple, who is now based in the US, made the announcement through a vlog on their family's YouTube channel, "Alapag Family Fun," which they uploaded over the weekend.

Based on the vlog, LJ is now 13 weeks pregnant with their baby.

"I'm now almost 13 weeks [pregnant]. Hinintay muna na namin na matapos 'yung third trimester [before we announced it] because I actually had two miscarriages. We did not announce it on the vlog. I actually had another miscarriage after the one nung before kami lumipat here sa States. I had it just last year, around December," said LJ.

"We kept it because our kids, especially si kuya, sobrang affected siya when I had the first miscarriage. So we wanted to make sure na sure muna before namin ina-announce."

LJ added: "So far, everything looks good. The baby's heartbeat is normal, everything looks normal. I did some labs [but] I'll do more labs and tests on the 20th week so please keep us in your prayers. Kasi sabi nga ng doctor, hindi na rin daw ako bata because I'm now 41. And by the time [I give birth], 42 na."

LJ and Jimmy have been happily married for almost 12 years now. The couple moved to the US during the COVID-19 pandemic with their three kids: Ian, Keona, and Calen.