Actress Roxanne Barcelo and her husband Jiggs recently celebrated the first birthday of their son Cinco. 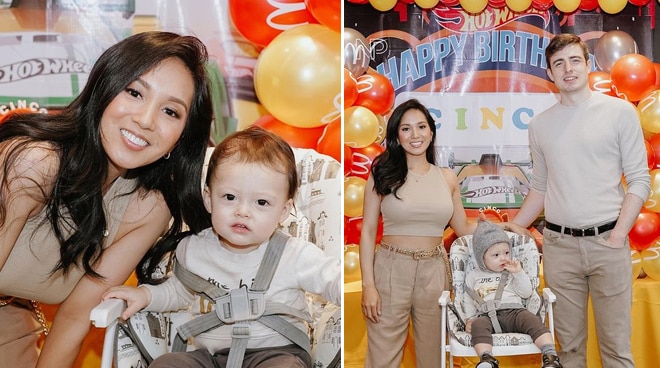 Actress Roxanne Barcelo and her husband Jiggs recently celebrated the first birthday of their son Cinco.

As seen in her Instagram post, the couple threw a fun birthday party for their son at a popular fast food chain in Manila where they had their first date.

"When I first met Jiggs, I had this thought come over me, that he would be the father of my children. Apparently, they are right when they say 'you know from the very beginning.' (Siyempre 'di ko sinabi agad sa kanya noh. Hinayaan ko muna siya magsabi na ako ang the one niya. Ngyawwww.. saka ko ni-reveal lel.)

"After 3 years, here we are celebrating our son’s big One. Wuhoooo! Love you, Cinco!!! (Anak, I lab you. tadtad pisngi mo ng kizzz.)"

In her post, the actress also paid tribute to her husband as she wished him a Happy Father's Day.

"I now have my own family in you two. Love you both with all that I am (Yes, ma-drama akong ina. Ganon talaga)," she continued.

"Best daddy to our little love that I could ever wish, pray, hope for. Happy Father’s Day aking mahal (Pa-kissssssss dadaaaaaaa)."

It was on May 22 last year, when Roxanne, 37, gave birth to her firstborn child Cinco.

The actress announced her pregnancy in April 2021, four months after she made a surprising revelation that she was now a married woman.

Previously, Roxanne said that she is blessed to have her husband by her side as she navigates the joys and hardships of parenthood.

She also said that she waited all her life to become a wife and a mother, and now that she is both, "I am fully humbled by this truth: As they all say, it's not easy, but it is all worth it."