Watch Jung Ho-Yeon and Sandra Oh’s conversation for the ‘Actors on Actors’ by Variety. 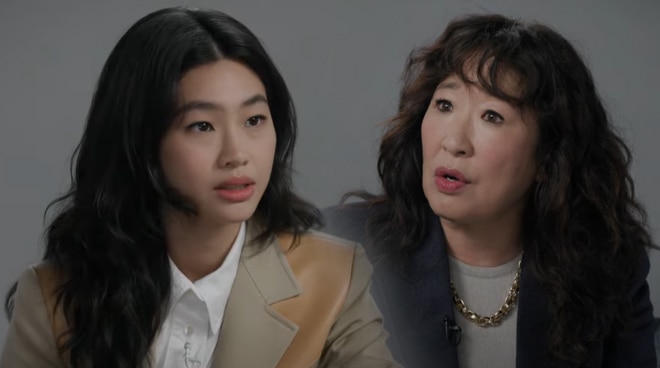 Jung Ho-Yeon shared her journey navigating fame and success after Squid Game became a global hit in a conversation with Sandra Oh for an episode of Actors on Actors by Variety.

In the said episode, Ho-yeon relayed what it was like when she suddenly catapulted to fame when Squid Game was released on Netflix.

"When the Squid Game came out it was just going like suddenly, 'We know who you are.' And then people recognize me. Even like you (Sandra), for me I was like a little child in Korea and Grey's Anatomy was like a huge thing in Korea because of you and you're kind of an icon and when I met you at SAG Awards you know me and that was like wow and there was like a bunch of people that already know me and that feeling was weird but also like oh wow," she said.

Ho-yeon admitted that though it is an exciting time, she also fears being in the spotlight.

"But at the same time I'm getting scared, like people are watching me, things that I'm saying or where I'm going. It's like people starting to pay attention," she confessed.

"And I never care about that many people's opinion of my life and everything. And I don't even want to listen to my mom's opinion," she quipped. "But now I think I'm trying to get used to it and then I'm trying not to go to extreme this side or to extreme that side," she said.

When asked by Sandra on how she is coping with fame and success, Ho-yeon shared that she does consult more experienced stars like her fellow Squid Game actors about it.

"I think I ask a lot of questions to people [who are] better or more experienced like director Hwang (Dong-hyuk) of Squid Game, executive producer, or Lee Jung-jae and Park Hae-soo, like the people around me and even they don't have a proper answer on my question, it's just good to share about like the doubt in me right now. It's just helpful to keep sharing and not be too much isolated [through] my closest people," she relayed.

Then during their conversation, Ho-yeon asked Sandra how she's able to cope with the pressure of the limelight.

Sandra said, "I feel like I learned I had to take care of my health first but that's not only your body right? That is your soul, that is definitely your mind you know even so those things, doubt, question, because you can't ultimately depend on anyone else. You have to, no matter what, somehow find it within yourself. You ask people's opinions but ultimately we are alone with ourselves."

Squid Game made history as it set a new Netflix record for any series on the streaming platform in its initial debut.

Netflix announced in October 2021 that the series reached 111 million fans in a span of 25 days since it was released on September 17.

Ho-yeon plays the role of Kang Sae-byeok in the series, a North Korean defector who joined the game to earn money to rescue her parents across the border and buy a house for her family.

The actress won Most Outstanding Performance by a female lead in a drama series at the 2022 SAG Awards.

In her speech, the Korean star remarked that winning the award is a dream come true.

"First and foremost, thank you so much. I have sat many of times watching you on the big screen dreaming of one day becoming an actor. I just want to say thank you so much. Thank you... made me dream and open the door for me. And I love you my Squid Game crew!" Ho-yeon remarked.