Did you know? Kelsey Merritt started modeling at 15

Kelsey Merritt opened up about her journey as a model in her latest interview with Vice Ganda. 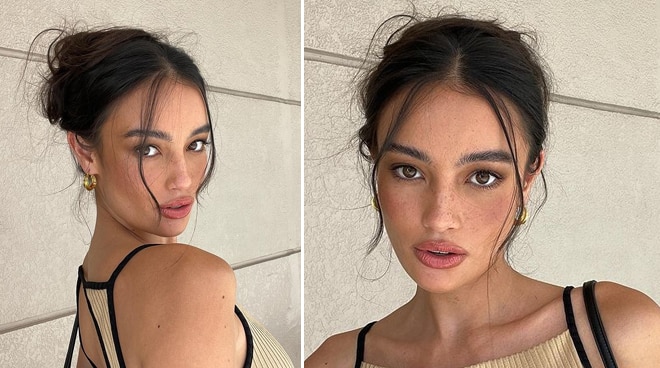 Vice Ganda did an interview with Filipino-American model Kelsey Merritt in his latest YouTube vlog.

In the said interview, Vice asked Kelsey about her journey as a model.

Kelsey shared that she started modeling when she was 15 years old.

In 2017, Kelsey moved to the US to pursue her modeling career there. Kelsey said that one of the reasons she models in the US is because the industry there is now looking for more diverse models.

"You know one of the reasons why nag-work ako ng modeling sa States is I can look like a lot of ethnicities, very ambiguous. Kasi di ba dati may isang stereotype ng mga nagmo-model. So ngayon ang gusto nila iba-iba look. Diverse," she shared.

Kelsey also shared on how she became a Victoria's Secret model.

The Filipino-American model shared that it was a year after living in the US when she booked the project with Victoria's Secret.

"Sobrang nerve-wracking kasi it's my dream, my ultimate dream. Like mga Angels, as in I really looked up to them. I was already signed with an agency in New York. Tapos after college pumunta na ako ng States, 2017 'yun. And nakuha ko 'yung show 2018 after a year of living in the States," she said.

Vice also Kelsey asked if she experienced rejections throughout her modeling career.

In the same vlog, Vice also did a bag raid with Kelsey.

By the end of the video, the It's Showtime host shared to Kelsey why a lot of people admire the latter.

Kelsey then replied that she really converses in Tagalog whenever she is in the Philippines.

"Nagta-Tagalog naman talaga ako when I'm in the Philippines with my family and friends. I lived here most of my life until I was 21. Four years lang ako nandun [sa US]," she said.

Kelsey started to work as a model in Manila ever since she was still attending her freshman year in Ateneo.

The model graduated from college in 2017 with a degree in Bachelor of Arts Major in Communication.

"I can say that one of the best decisions I've made so far is to finish my degree instead of stopping it halfway. Right after completing my second year in university, I moved to live in New York for a few months to model. My agency at that time asked me if I wanted to consider online schooling so I don't have to go back to the Philippines, and I have to say it was tempting... But I chose not to,” she said.

She went on: “I stuck with going back to school, knowing I won't be able to be in NY for the most part of the year to do what I love. At the same time, I wouldn't be where I am if it weren't for the choices that I have made. The choice was not easy, but no one ever said it was going to be," Kelsey posted in May 2017 days before her graduation.”

"People often ask me how I managed to do it, and all I say is that as long as you have your priorities straight and manage your time well, then it really can be done," she continued.

It was in November 2018 when Kelsey walked the runway of the Victoria's Secret fashion show. She is the first Filipino to be part of the fashion show.