‘Viral Scandal’ actress Dimples Romana shares which celebrities will be her third child’s godmothers and godfathers. 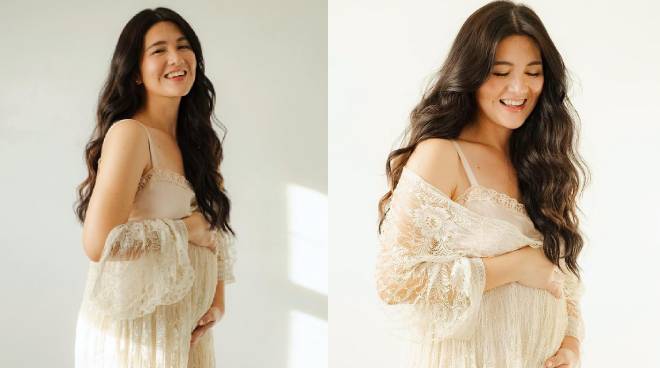 After revealing last month that she is expecting her third child with husband Boyet Ahmee this coming July, Dimples Romana shared with her followers that she is focusing on keeping a positive mindset and avoiding stress as she enters her last trimester. In a recent Instagram post, the 37-year-old actress reached out to fellow mothers who might be having a difficult time during their pregnancy.

“Pag buntis they advise us to avoid muna being stressed, always happy and positive to make sure our baby is SAFE, not stressed also and happy in our tummy. 💕🤰🏻

“Unfortunately I know a lot of preggy women who suffer extreme anxieties and depression during their pregnancy. 🥺
So here’s a big hug to all the preggy mommas and mommas who just gave birth going through a roller coaster of emotions including stress and depression. I hope you know you are not alone. Yakap mommas! Kaya natin ito ♥️ ”

Aside from Vilma Santos and Rayver Cruz, other celebrities who are included in the list of godparents but were not able to attend the party are Charlie Dizon who currently plays her eldest daughter Rica Sicat in Viral Scandal as well as her formers co-stars in her 2018 TV series like Belle Mariano in Bagani and Francine Diaz and Andrea Brillantes in Kadenang Ginto.

Dimples married her non-showbiz husband Boyet in 2003. Their eldest daughter Callie recently flew to Australia to pursue her dream of becoming a pilot. The couple also has a second child named Alonzo who is seven years old.