It’s a boy for Dimples Romana and husband Boyet Ahmee

Dimples Romana and her husband Boyet Ahmee are having another baby boy. 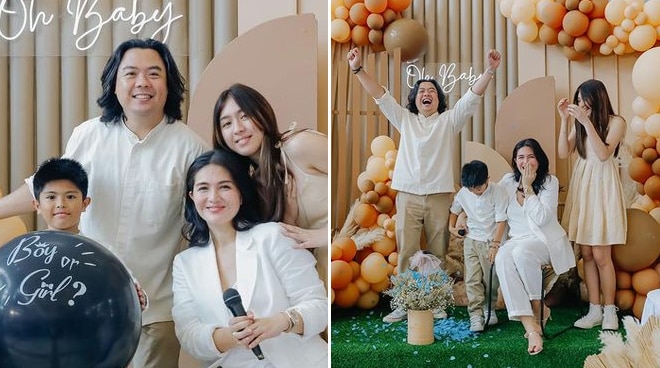 Dimples Romana and her husband Boyet Ahmee are having another baby boy.

The couple, who are expecting their third child together, made this wonderful announcement in a gender reveal party held Sunday, March 27, with their family and close friends.

Among those who attended the star-studded affair were Angel Locsin, Neil Arce, Janus del Prado, Sue Ramirez, and Kaila Estrada.

It was only on March 18 when Dimples, 37, made the surprising announcement that she is pregnant with her third child.

The actress has been married to her husband since 2003. Their first-born daughter, Callie, is now 18, and moving to Australia to pursue her dream of becoming a pilot. The couple also has a son named Alonzo, who turned 7 last February.

In a recent Instagram update, Dimples said she cannot wait to finally welcome her third child into this world. The actress, who is now six months pregnant, is scheduled to give birth this July.

"I’m so thrilled to meet you in three months, baby E. You have ignited emotions of GROWTH, SELF PRESERVATION, LOVE, and COURAGE in me. With your coming baby E, mommy is RENEWED," she said.