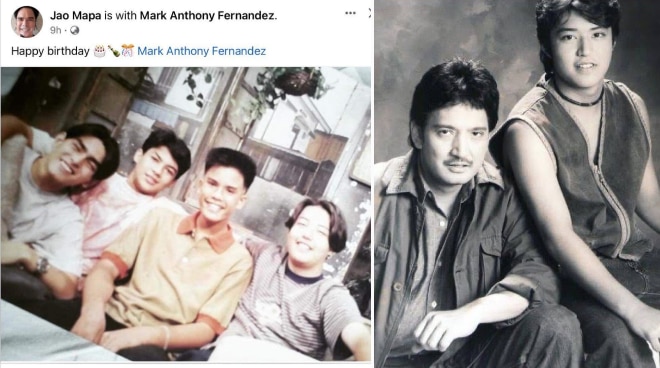 After reaching heartthrob status with their stint on the iconic comedy series Palibhasa Lalake which lasted for eight years, the ‘90s all-male group dubbed as the “Gwapings” became known on their own merit even outside the long-running sitcom. Originally composed of Mark Anthony Fernandez, Eric Fructuoso, and Jomari Yllana, Jao Mapa eventually joined the group to complete the cutest foursome of teen idols during their time.

READ: The Gwapings: Where Are They Now? | Push Pins

Although the four guys may have long parted ways as a male group, they are all still visible in showbiz and continue to pursue their passion for acting. Among the four, Jao is the only one who took a long hiatus in order to finish his studies and just recently made a comeback to acting last year as one of the stars of the Vivamax original film Paraluman. Last year, Mark starred in another Vivamax film Barumbadings.

Last January 18, Jao greeted Mark on his 43rd birthday with a throwback photo posted on his Facebook page showing the Gwapings during their early teens.

Mark’s son Grae Fernandez also posted a throwback photo of his dad along with his late grandfather Rudy Fernandez. Grae wrote, “Happy Birthday my Vader ❤️. Insert my GrandVader. I Love you.”