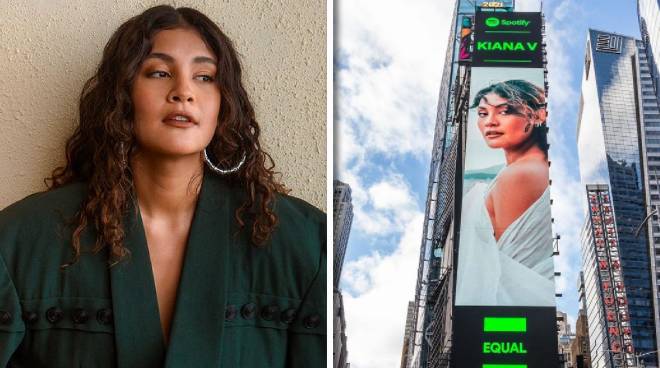 After flying back to the US last June to focus on her music career, singer Kiana Valenciano made dad Gary Valenciano proud with her latest accomplishment after making it onto a digital billboard on New York City’s Times Square last week, September 21.

On his Instagram account, kapamilya singer Gary V. shared a short video clip of his only daughter’s billboard along with the caption, “I WILL NOT APOLOGIZE FOR BEIING AN EXTREMELY PROUD DAD!!!!! Friends look who’s shining brightly on Times Square NYC!!!!

SPOTIFY Billboard on Times Square for Kiana DAZED Album. Uploaded at 12 noon today and will stay for 24 hours ! I love you @kianavee … remember I’m your dad k? Seriously….I want to shout for joy!!!!!!!!!!”

Kiana’s mom and talent manager Angeli Pangilinan also shared how proud she was on her own account.

he wrote, “My baby girl Kiana viewing her SPOTIFY EQUAL billboard after doing an Alicia Keys tune in an open mic bar in New York. She is also the COVER artist on Spotify’s female acts in the Philippines! Beyond blessed seeing my daughter reaching such heights ! Could only have been the light hand of God for such favor!

“Last year she made it to the Grammys.com site when she released her song ‘Safe Place’. This time she independently released DAZED, a mental health project which takes her fans through her own personal journey. Go and check her songs on Spotify and her videos on YouTube or her social media sites ! You will be pleasantly surprised with the songs she has produced and written or collaborated on. She’s got five new songs co-produced with Jesse Barrera. Her beautiful photos were taken by her childhood classmate DJ Magbanua and her Zion and Manila Genesis teams supported this amazing project. Thank you to MYX Global for this special trip to New York! Love you guys ”

READ: Kiana Valenciano returns to PH after nine months in US

Last year, the 28-year-old singer first flew to the US for eight months to start a new chapter in her life and returned in October before flying out again in June this year. Kiana was featured as the cover of the EQUAL Philippines playlist.

She wrote, “so proud to be on the cover of EQUAL Philippines Playlist  thank you @spotify @the_orchard_check it out to hear music by some of the country’s most talented women!”

Aside from being on the billboard, Kiana is also set to give fans a behind the scenes look on her travels to see the billboard and across the country in the MYX original series documenting her musical journey, called The Crossover. The TV show will air globally on linear TV, MYX.GLOBAL digital and @myxglobal social platforms.

As the only daughter of Mr. Pure Energy Gary V., Kiana’s OPM pop royalty genes shine through as the R&B/soul artist is paving her own way in the global music industry with previously released tracks like "Does She Know," "5:30," "Misfits," “See Me” and “Keep It Secret.” Last year, Kiana joined artists from all over the world at the Music Matters Live Lounge virtual event as well as showcasing her talent on Bandwagon Picks! — a curated selection of music from a number of artists from different parts of the globe.