Actress Aubrey Miles shared the secret to her lasting relationship with her partner, actor Troy Montero, as they recently marked their 18th anniversary as a couple. 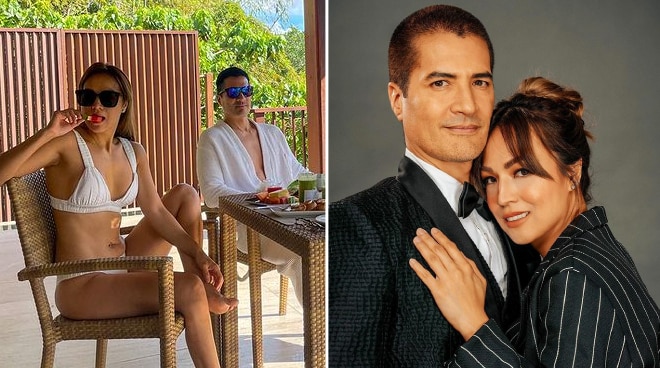 Actress Aubrey Miles shared the secret to her lasting relationship with her partner, actor Troy Montero, as they recently marked their 18th anniversary as a couple.

"People ask how to keep a strong and committed relationship for 18 years. For me, it’s not really complicated," Aubrey said in her Instagram post on Sunday, September 19.

"Always remember when you enter a relationship, could you see a future with this person? Maybe even growing old together?" she continued. "No guarantees though, nothing is guaranteed. All I can say is everything is a choice. Wrong or right, you know what you’re doing. Of course, there’s always struggle and ups and downs. Definitely nothing is perfect, but make sure you have more ups than downs. Stay the same or hopefully you want to be different, be better.

"One more thing: control, balance and keep it to yourself. [And] don’t forget to enjoy it with caution."

Based on her recent Instagram updates, the couple celebrated their anniversary at their favorite place: The Farm in San Benito in Batangas.

"18 years of breakfast dates with you. Mostly in pajamas and pangbahay na damit, but every so often we get a bikini and boardshorts, hotel robes or Birthday suit treat," he said.

"Thankful to get those bikini/hotel robe dates but it’s the pajamas and pangbahay breakfast days that got us to 18 delicious years. Cheers to our way of doing things @milesaubrey," he added.

Aubrey and Troy have two children—Hunter, 12, and Rocket, 3. The actress also has a son named Maurie, 20, from a previous relationship.

Earlier, the longtime couple revealed that they were supposed to finally get married last year, on their 17th year together.

“Yung 17 years na 'yun hindi namin naisip magpakasal kasi we had so many things planned na gagawin. 'Yung wedding, 'yung ceremony parang later on but we weren’t scared to talk about it. And 'yung 17 years na yun, feeling lang namin, we’ve been through a lot, we’ve done so much, ano pa ba? Maybe let’s get married already! That’s why," the couple said in a vlog they released last June.

The two were set to tie the knot on April 23, 2020 in Batanes, their dream wedding location. However, they were forced to cancel the wedding due to the COVID-19 pandemic.

In the vlog, Troy also shared his thoughts on possibly having a civil ceremony while waiting for the situation to become safe again to have their dream Batanes wedding.