John Arcilla lamented how his family wasn't able to grieve properly as his brother had to be buried ‘at once.’ 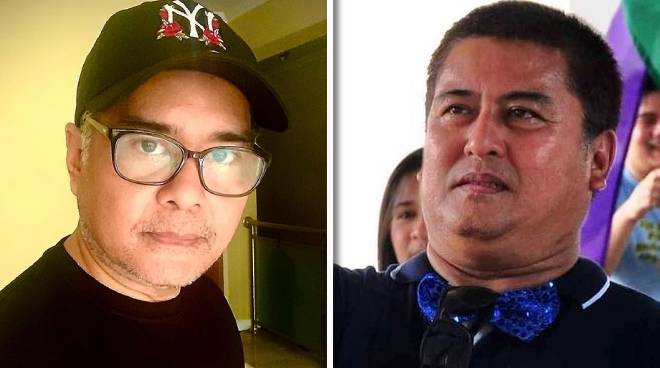 John Arcilla is mourning the death of his brother, Emmanuel Acilla, who passed away on Monday, June 14, amid the coronavirus pandemic.

In a lengthy post on Facebook, the Heneral Luna actor lamented how his family wasn't able to grieve properly as his brother had to be buried "at once" on Tuesday, June 15, after he tested positive for COVID-19 in an antigen test.

"DID MY BROTHER DIE 'WITH' COVID? Today, my elder brother passed away in time of pandemic in Baler June 14, 2021, DOA (dead or alive) at the hospital. This heartbreaking incident is just a year apart from my father’s, who left us on April 5, 2020, just almost 2 weeks after the first lockdown in Manila. During my father’s passing, also in Baler, there was an understandable brief wake for all our pleadings. Me and my siblings, all the kids and grandchildren here in Manila never had the chance to bury him even if he died free of covid because of travel understandable restrictions and protocols. Baler by that time is still in a zero-case COVID status. Nevertheless it was such a devastating moment in our lives," John began.

"Today, my brother Emmanuel Arcilla will be buried at once because he was 'positive' by antigen. His kids and grandchildren were quarantined right away while his body is supposedly sealed at the morgue and will be buried before 10 a.m. tomorrow (June 15) by the LGU (Local Government Unit)'s MDRRMO (The Manila Disaster and Risk Reduction Management Office). Again me, my siblings, kids and our grandchildren can not come due to limited time and travel protocols. It’s been a year since my father’s passing and here we are again, yet our COVID cases are even scarier and greater while the vaccines are already available. Baler now has around 50 cases. I don't want to resort to a blame game. I want to think I am better than that. This COVID is everyone’s responsibility but there are some things that add pain to the injury," he said.

According to John, his brother—who suffered from diabetes and hypertension for several years prior to his death—was declared dead on arrival due to heart failure. However, he was then declared to be COVID-19 positive because of an antigen test just a few minutes later.

"And it is a protocol that the body should be buried in less than 24 hours. So it prevented his kids, grandchildren and us his family to see his body. Painfully understandable," he continued.

John said they then asked for a "real swab", even though his brother was already buried, just to ease their minds.

"But it is not an 'allowed' procedure anymore (?), according to the hospital," he said.

John went on: "It is just bothering and too much to bear because doctor friends say that there’s still inaccuracy in COVID testing, especially with just antigens. And there are several incidents that some friends have experienced 'false positive' or 'false negative', and the medical community agreed that it is not a remote possibility. I know I should blame no one since the inaccuracy in medical results and diagnostics will not be taken against hospitals or doctors. It could be in the testing tools or in the procedures itself since it is not a hundred percent perfected yet as experts said. So now my brother will be clinically declared as a person who died of COVID, with uncertainty."

READ: Geneva Cruz returns to work after losing mom to COVID-19: ‘Grief is a journey we must experience’

The actor then revealed that just recently, he survived COVID-19 while in the United States. He also shared that two of his sisters also tested positive for the virus but fortunately have since recovered.

"In times like these it is hard to embrace every pain, stress, and considerations all at the same time," he said.

John went on: "I was thinking, will it be the same if my brother had his vaccine? I am done with mine. ... We have been convincing my brother Emmanuel to take the vaccine several weeks ago, but he does not believe or scared in the vaccine due to things they’ve been hearing from people. Sometimes you don’t know what to blame. The people’s hesitation? The medicine’s limitations? Or the people who delayed the vaccines for whatever reasons, that are now about to expire?

"I can say am better now in handling these situations compared to the months before this. My family, my friends and my work pushed my perseverance to deal with it and they made me stronger. Keeping my trust and connection to the Almighty keeps me better every day."

To end his post, John called everyone to be responsible and reliable to avoid such cases as his brother's.

"So after more than a year when will this COVID scare, dying with COVID and dying probably with COVID end? USA is 400x bigger than our small Philippine archipelago but they’re starting to go back to normal," he said.

"From whose weakness why our situation is getting worse? It could be our people (baka madami pa din pasaway). It could be the people who makes business out of these miseries (bakit sila nakakalusot?). It could be some public officials (bakit natin sila binoboto?). Who really knows? But one thing is for sure, it is all our responsibilities. We need to mature as people to act responsible and reliable to lessen or totally avoid these kinds of misfortunes," he continued.

Finally he said: "I grieve for my brother, for all the loved ones who passed away and to all families who had the same experience as ours. God bless us all."