Celebrity couple Gerald Anderson and Julia Barretto work out together at the actor’s outdoor gym at his private resort in Botolan, Zambales. 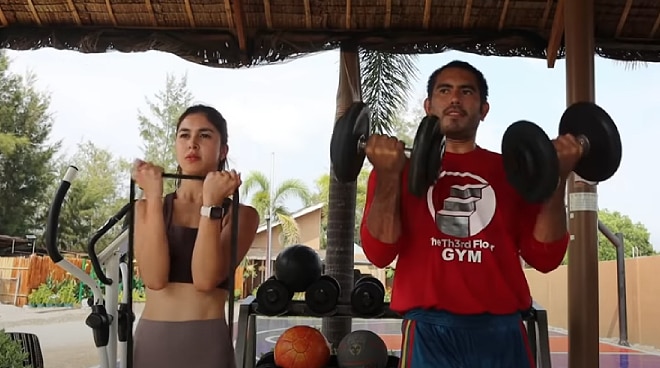 Gerald Anderson challenged his girlfriend Julia Barretto to do his workout routine in his latest vlog released over the weekend.

In the 20-minute video titled "She Survived My Workout!", the couple is seen working out together at Gerald's outdoor gym in his private resort in Botolan, Zambales. Their workout included three sets of upper and lower body and abdominal exercises, including bench presses, squats, lunges, shoulder presses, bicep curls, and ab crunches —with Julia doing the easier version using light dumbbells and bands.

"Remind me not to train with you!” Julia jested during the workout.

"You think that's it but it's not," said the actress after surviving the killer routine. "You feel like you worked out for two hours with that kind of workout."

The two then enjoyed a quick dip in the pool, before Julia prepared chicken salpicao for Gerald as their post-workout meal.

The couple, who were paired together in the 2019 movie Between Maybes, admitted their relationship last March.