‘Dito at Doon’ to have world premiere at Osaka film fest

TBA Studios' ‘Dito at Doon’ is set to make its world premiere at the 2021 Osaka Asian Film Festival to be held from March 5 to March 14. 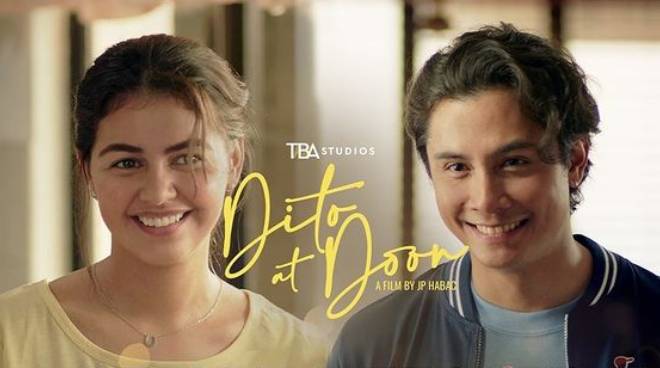 TBA Studios' Dito at Doon is set to make its world premiere at the 2021 Osaka Asian Film Festival (OAFF) to be held from March 5 to March 14.

Janine Gutierrez and JC Santos, lead stars of the romantic film, shared the good news with their fans on Tuesday, February 9.

"Soooo happy about the news!! I wiiiish we could be there to attend but just very grateful that we got in at wala nang mas makapagpapasaya sakin kundi ang mapanood niyo ang aming pelikula,” said Janine.

On Instagram Stories, the actress revealed that the acclaimed movie Babae at Baril, for which she won Best Actress in the Gawad Urian and FAMAS, was supposed to have its international premiere at the OAFF as well. However, "everything got cancelled" due to the coronavirus pandemic.

"So crazy to think how here we are, one year later, still unable to live life as we did before. For what it's worth, at least we're still creating. Hoping and looking forward to better days for all filmmakers and everyone in the industry," she said.

Meanwhile, aside from Dito at Doon, JC's movie Kintsugi was also selected for the festival.

Directed by JP Habac (I'm Drunk, I Love You, Sakaling Maging Tayo, Gaya sa Pelikula), Dito at Doon centers on the romance of Len (Janine), a frontliner, and Cabs (JC), a delivery man, who meet at an “e-numan” through a mutual friend.

The movie is scheduled to premiere locally on March 17.