Janine Gutierrez and JC Santos exchange messages after wrapping up their new movie, ‘Dito at Doon.’ 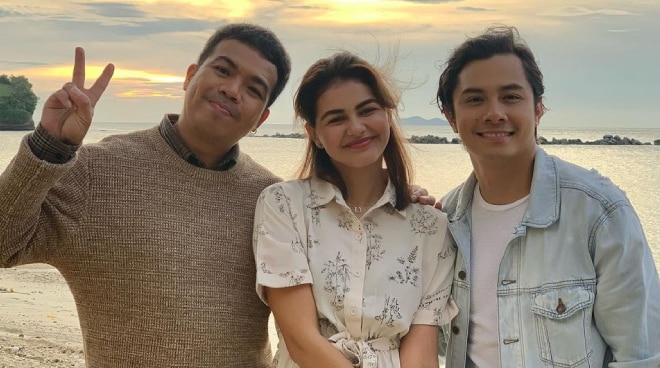 Janine Gutierrez and JC Santos exchanged appreciation messages for each other after wrapping up the filming of their new movie, Dito at Doon.

On Instagram, JC shared a photo showing himself with Janine—taken during the film's last shooting day—as he expressed his gratitude to his onscreen partner.

Janine and JC worked together on Rae Red's Babae at Baril in 2019, for which the former was named best actress at the 43rd Gawad Urian and Filipino Academy of Movie Arts and Sciences (FAMAS) Digital 2020 Awards.

For her part, Janine said it had been her wish to collaborate with JC for a project, as she likewise thanked the actor for their successful team-up.

"Thank you for everything, Pati sa pag coach ng s2pid luv. Haha. Had the best time with you and I'm a fan forever. Hanggang sa uulitin ha!!!!!!" she added.

Dito at Doon is directed by JP Habac, who is best known for the hit film I'm Drunk, I Love You.

The movie is produced by TBA Studios. It also stars actors Victor Anastacio and Yesh Burce.

A release date for Dito at Doon has yet to be announced.