Dingdong Avanzado after being attacked by bees: ‘I counted over 40 stings!’

Jessa Zaragoza gives an update on husband Dingdong Avanzado’s health after being hospitalized after 40 bee stings. 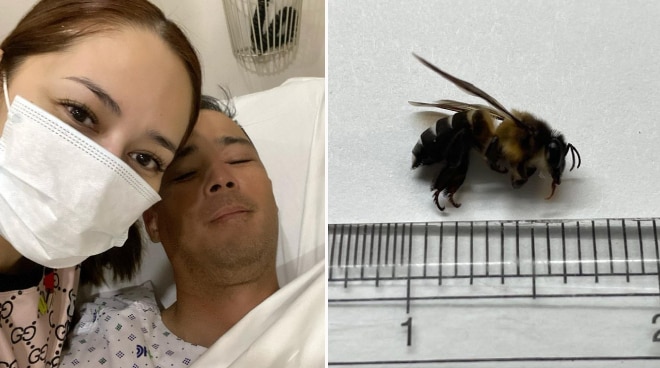 This year’s Christmas Eve was a memorable one for teen singer Jayda Avanzado’s family, not just because of the holiday season because of her father Dingdong’s horrifying experience on the golf course where he was attacked by multiple bees. Jayda’s mom Jessa Zaragoza shared details from the mishap last December 24. The singer-actress also shared photos of herself and her husband after they rushed him to the hospital and a specimen of the one of the bees which attacked him.

EXCLUSIVE: Dingdong Avanzado on daughter Jayda: ‘It saddens me to see my daughter be a victim’

She wrote, “These past 24 hours have been one of the most memorable and jarring experiences we’ve encountered as a family. During Dingdong’s golf game yesterday, he was stung by a swarm of bees. He drove home feeling really sick and nauseated. As soon as he got home, that was the first time I’d seen my husband throw up really bad. I got so worried he’d go into anaphylactic shock, due to the venom coming from the multitude of bee stings. I counted over 40 stings all over his body, the majority on his back, where it looks like the bees invaded his shirt.”

In the same post, Jessa recalled her husband had not wanted to be rushed ot the hospital for his wounds until he was finally convinced by their only daughter. “I tried convincing him to go the hospital, Pero ayaw talaga. Buti nakinig sa Anak! @jayda. ‘Minsan pala kailangan din pagalitan ng anak yung tatay! Hahaha😄’ So finally, we went to the ER and hooked him up with some stronger meds through an IV. May swelling pa din mga bites esp the one sa eye nya. Mejo nakasara yung isa,” she added.

Before ending her post, Jessa assured fans of the OPM singer that he is now on the road to recovery.

“Dingdong is doing fine right now. Mejo groggy pa din from the anti tetanus vaccine. We hope and pray that he will recover faster. I think that the most important thing right now for our family is the fact that we can celebrate this Christmas being together. Thank you to all our dear friends that sent us well wishes for Dingdong. Merry Christmas!!! May GODBLESS you all!❤️💚”

Dingdong and Jessa celebrated their 20th wedding anniversary last March and were known as the original prince of Pinoy pop and jukebox queen in the country respectively. They got married in 2001 and had their only daughter Jayda in 2003.