KZ Tandingan proud to have a billboard in New York City: ‘My heart is full’

‘11:59’ singer KZ Tandingan shares how grateful she is for the latest milestone in her career. 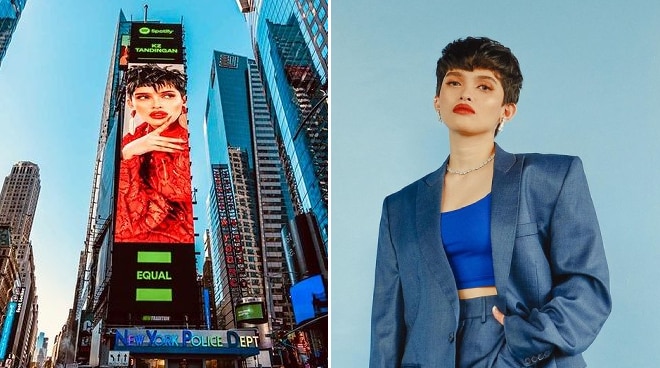 The Tarsier Records artist broke the news on social media which KZ reposted on her account last November 18.

“Everyone poured their hearts out for this because @kztandingan deserves it! we’re so proud and happy to say that we made it to New York! This is one for the books! thank you @spotify! #KZ1159 #SpotifyEqual”

The 29-year-old singer followed it up with another post about how grateful she feels to have reached a new milestone in her career. She also asked her followers based in New York to share photos of her billboard since she can’t travel there to see it in person.

“My heart is full. ❤️ I don’t know what I did to deserve these people, achievements and moments but I am grateful, Lord. When I find myself doubting the path and questioning my abilities, I will look at these photos to remember that Your plans are always greater than mine.
“Thank you.

*CONTINUE STREAMING 11:59 ON ALL DIGITAL MUSIC STREAMING PLATFORMS WORLDWIDE!! I CAN’T BELIEVE WE GOT THERE!!! ❤️‍🔥 #KZ1159

“hey, if you’re in NYC and chanced upon this digital billboard in Times Square, would you mind taking a selfie with it in the background? haha I’d love to be there to see this IRL but can’t so please make my dreamz come true! TAG ME PLEASE? 😭❤️ thank uooou”

READ: KZ Tandingan and TJ Monterde believe that Bisaya is the future of OPM

Earlier this year, KZ and husband TJ Monterde released their songs “Inday” and “Dodong” which they wrote for each other. The couple, who both hail from the Visayas region, were also vocal about their advocacy to promote more regional songs for mainstream release.