After surprise visit to Frankie, Sharon Cuneta asked: How about KC?

Music icon Sharon Cuneta slammed netizens who called her out after she revealed that she flew to New York to surprise her daughter, Frankie Pangilinan. Music icon Sharon Cuneta slammed netizens who called her out after she revealed that she flew to New York to surprise her daughter, Frankie Pangilinan.

According to screenshots posted on a gossip website, netizens criticized Sharon for allegedly playing favorites among her children, as they reminded the actress-singer that she has "another daughter" in Los Angeles that she should also visit—KC Concepcion.

Responding to a netizen who pointed that out, Sharon wrote: "Yes, I HEARD! I wonder how she is and what she is doing?"

Another basher accused her of favoring Frankie over KC, noting that Sharon never visited her eldest daughter when she was still studying in Paris.

Currently, Frankie is in New York to pursue a college degree, while KC decided to extend her stay in LA to finish her Gemology course.

"You will visit Frankie. But have you ever visited KC when she was still studying in Paris? I guess, no! But now, will you ever visit KC there in the US? You will say that KC seems to be too far from you... she is not. It is that you have your favorites. You chose Frankie over her. She feels out of place when she is with you... with your family. Thank goodness that Gabby Concepcion is there, caring for her unboundlessly... because she is the first," said the basher, referring to KC's father.

"You have your favorites! And seems like KC is not one," the basher again said. "Yes, KC is independent but have you ever thought that she might be longing for your love? You will say that is distant from you, but really, the problem is not with her. It is with you!" "Maybe try mo baligtarin," Sharon answered back. "You obviously know nothing about us and because I am their mother, you cannot expect me to talk badly about any of my children. Remember, we are all human beings, we all can be hurt by those we love. And generally speaking, kahit 100 na tao ang mahal mo, doon ka mapapalapit sa sobrang nagmamahal at rumerespeto sa 'yo." 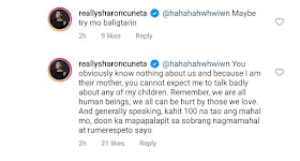 In her reply to another Instagram user, Sharon, who was a single mother to KC, said she was the only person who has worked hard to raise and provide for her eldest daughter. KC is Sharon's daughter from her previous marriage to Gabby, her former onscreen partner and husband. Meanwhile, Frankie is one of her children with her current husband, Senator Francis "Kiko" Pangilinan.

Meanwhile, in her other replies to her followers, Sharon gladly talked about her emotional reunion with Frankie.

"I cried so much when I saw her and hugged her so tight. She slept beside me and I sang her a lullaby which I sang to her every night when she was a kid while running my fingers through her hair as we tightly hugged! I'm crazy about this kid," she said.

The screen veteran, dubbed local showbiz's "Megastar", also promised to post photos of her and Frankie after her New York trip.