‘Sakalam’ singer Gigi De Lana shares why she chose a pop rock ballad for her debut single along with the Gigi Vibes band. 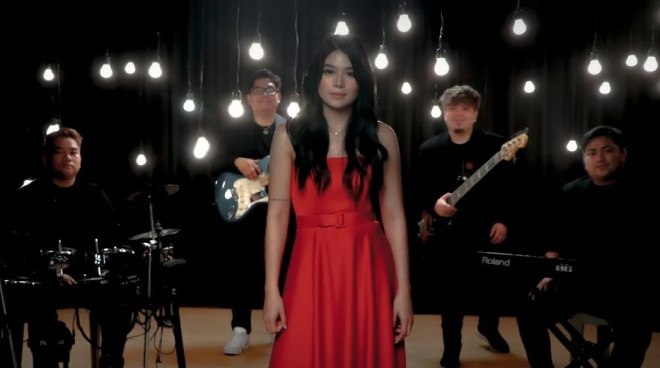 “Of course, I’m very happy. Hindi kami bumitaw sa goal namin at gusto namin marating even though before we had different visions and we had different goals. Pero nung nag-sama sama ulit kami, nabuo namin itong ‘Sakalam’ at napakagandang song nito. I’m very happy. Yung puso ko umaapaw ngayon kasi ang dami naming pinagdaanan. We’re not perfect but you still love us for who we are and we are very, very thankful for that. Thank you so much sa lahat ng nagmamahal sa amin,” she shared during their recent virtual press conference.

Written by Gigi Vibes band members Romeo and Erwin, “Sakalam” is a power rock ballad that lyrically tackles a person’s struggle to let go of a broken relationship despite the detachment of her partner.

As Gigi and her band’s popularity continues to grow, the 26-year-old performer admitted they dream of going on a US tour to meet their fans abroad once it is safe to travel again.

After going viral for her rendition of “Bakit Nga Ba Mahal Kita” earlier this year, Gigi said she and the Gigi Vibes band will continue to do cover songs even when they start working on their own albums.

Aside from being the first original song of the newest pop rock diva, “Sakalam” also serves as the first single off her debut full-length album set to drop in 2022. The song is currently listed at the top spot of Spotify Philippines' Fresh Finds playlist. Watch Gigi’s debut single “Sakalam,” out now on various digital music platforms, and watch its music video on ABS-CBN Star Music’s YouTube channel.