Judy Ann Santos, G Töngi, Mylene Dizon showed that their bond goes beyond their show which ended two decades ago. 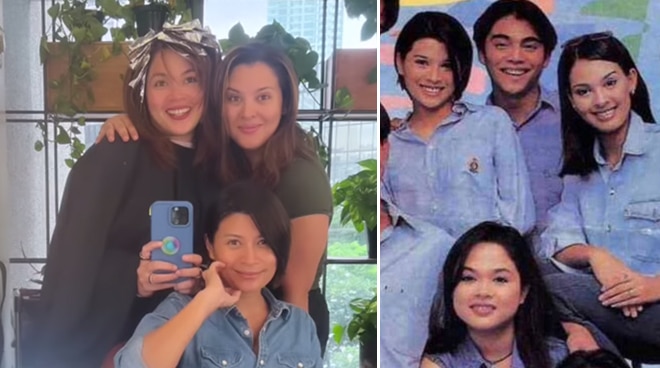 Stars of the 1996 youth-oriented show Gimik had an unexpected mini-reunion at a salon last September 20. Judy Ann Santos, G Töngi, and Mylene Dizon ran into each other at the salon of celebrity hairstylist Jing Monis.

On her Instagram stories, Judy Ann shared some photos of their impromptu meet-up.

The reunion was supposedly organized by Jing himself as Judy Ann thanked the celebrity hairstylist for the surprise. In one of her stories, the actress and Mylene were snapped while getting their hair done and eating food which was ordered by Jing.

In another story of the actress, the three posed in front of the mirror while Mylene’s arm was extended in the air to signify that they were missing their fellow actress Jolina Magdangal in their sudden meet-up.

Fans of the show immediately asked the three for a possible reunion of the original cast. In G’s Instagram post, netizens commented on how they missed seeing them in one show. They shared how Gimik was their go-to show every Saturday afternoon back in the ‘90s when it was still airing.

Gimik became a hit show for the youth in 1996 up until its final episode in 1999. They also had a film, Gimik: The Reunion, in 1999 with the same cast except for Judy Ann who had a special participation in the movie.

Other celebrities who were part of its original cast include Marvin Agustin, Patrick Garcia, Kaye Abad, Diether Ocampo, and the late Rico Yan, among others.