Jason Abalos and Vickie Rushton tie the knot after being together for over a decade. 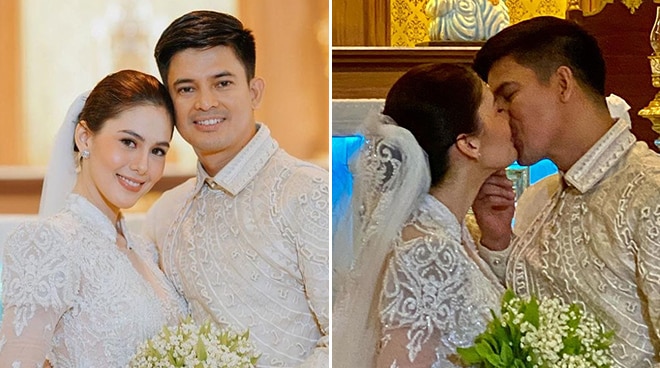 Actor Jason Abalos and former beauty queen Vickie Rushton just got married earlier today, September 1. The two tied the knot in a church ceremony in front of their family and closest friends in the industry.

Nice Print Photo, their official photographer, shared the first official wedding photo of the couple. Vickie was wearing a beautiful white dress while her husband was wearing a traditional barong with some embroidery. Both wore Francis Libiran designs.

In one of the videos taken, Jason was seen wiping his tears as Vickie was nearing the altar. The two shared their first kiss as a married couple in front of their friends and families.

Also present at the wedding were actress Kaye Abad and her husband, former Pinoy Big Brother housemate Paul Jake Castillo, who were both part of the entourage. Actors Joseph Bitangcol and Raphael Martinez were also present.

Joseph, Raphael, Joross, and Jason were all products of Star Circle Quest. Jason was part of the second season of the reality program while the rest were in the debut season.

The couple shared their pre-nuptial photos a few months back. They did the shoot in Jason’s hometown, Pantabangan, in Nueva Ecija. It was back in June when the newlyweds announced that they have been engaged since September of last year. The two have known each other since 2010 and have hit it off since then.