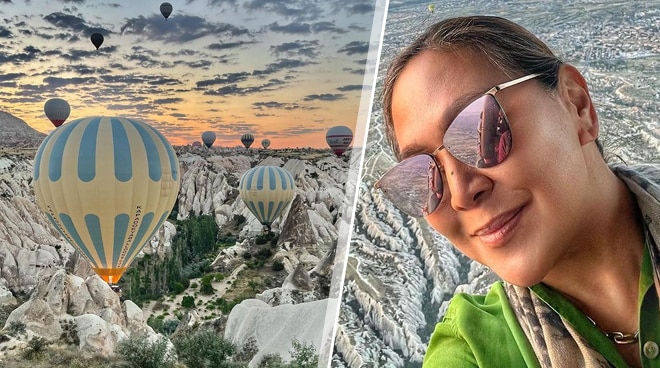 Karen Davila checked off an item from her bucket list after riding a hot air balloon in Cappadocia, Turkey.

The ABS-CBN broadcaster documented her adventure in one of her latest YouTube vlogs.

"Bahagi ito ng bucket list ko. I was always excited to see Cappadocia and of course tayong mga Pinoy gusto natin ng something unique, adventurous, and also something wherein we can experience the culture of the place,” she said.

"I was always excited to see the Cappadocia and of course do the hot air balloons sino ba naman hindi?" she added.

In her vlog, Karen shared that they started their day early to ride the hot air balloon.

When they reached the location, Karen shared that she saw numerous balloons being prepared for the ride.

"When we got there ang dilim, wala kang makita pero ang dami-daming balloon na magkakatabi. Actually you can already see it and suddenly pinainitan na nila ang balloon. It was so majestic to see," she said.

According to Karen, the balloon can fit a maximum of 28 people.

"There is a captain, para ka lang sumakay ng barko. 'Yung kapitan before taking off, he even gave us the standard operating procedures halimbawa may nangyari, if ang balloon ibababa na ito, ano ba ang dapat gawin? So hindi lang ito basta take off," she shared.

Karen shared that taking off was quite slow so it was not scary at all.

"When we got up, it was very peaceful and hindi siya nakakatakot kasi mabagal lang 'yung pag-angat ng hot air balloon," she shared.

"And above it all, that's where you can really see the rock formations," she added.

After the hot air balloon ride, Karen remarked that the experience was "absolutely magical."

"Iba 'yung pakiramdam mo on the air. You feel rested. It is very calm up there. It's like, sabi nga nila, it's like you are seeing a fairytale, totoo 'yun," she remarked about the experience.

Karen travelled to Turkey with her family.

Prior to her Turkey adventure, Karen and her family also went on a cruise in the Arctic.

The broadcaster also documented her Arctic adventure in a YouTube vlog. She also penned a post on social media about the Filipino crew she met on the cruise ship back in July.

"THE ARCTIC… FILIPINO CREW   What an honor to do a meet & greet with our Pinoy crew aboard the Silversea Cloud Expedition!" she stated.

Karen added, "Of 219 crewmembers, 106 are Pinoys assigned in different areas from technical, engineering, F&B, entertainment, housekeeping & expedition team! The highest being the First Officer & Restaurant Manager!! Ang gagaling ninyo! I felt so proud being with you guys."