Kryz Uy opens up about her mistakes as a first time mom, shares what she’s doing differently now

Kryz Uy shared the things she is doing differently now when taking care of her second child. 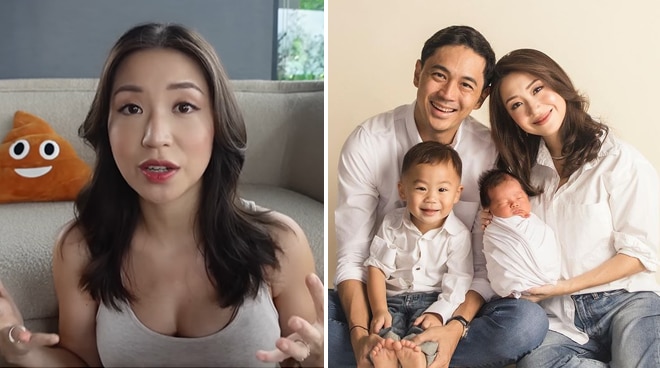 Kryz Uy opened up about the mistakes she made when she was taking care of her first child Scottie when the latter was still a newborn as well as the things that she is doing differently now with her second child Sevi.

In her latest YouTube vlog, Kryz first shared the changes she made when it comes to putting a baby to sleep, this time around, with her second child.

“First mistake. When Scottie was a newborn, a lot of moms told me: ‘You know what, you should make your kids sanay to sleep anywhere even it is a noisy environment so don't let him coop up in the room so you don't have to tiptoe around him when he's sleeping. You should keep him like in the broad daylight so that he can sleep anywhere,” she said.

“You should talk even when he is sleeping, even with a normal voice. He should hear the vacuum, the coffee machine, everything should be normal so that you could train him to sleep wherever and he's not gonna be a picky sleeper,’” she added.

But Kryz had some realizations, saying that following that advice was wrong.

“Even us adults we can't sleep na nga if it is a noisy environment. If it is super bright, it is harder for us to sleep, what more these kids, these babies who are so used to the dark of our wombs?” she stressed.

Kryz further explained: “When Scottie was a newborn we were always in the living area, we were making breakfast and he was just there. We were watching TV, he was right there. It was super duper bright because our house was a glass house which is probably why he never slept. And Slater and I always said Scott is not a sleeper lang talaga. He is just a baby who is having a hard time sleeping.”

“No wonder because his sleep environment was not optimal at all. And now with the amount of research that I've done and also with the experience that I had, Sevie sleeps in own room…. Creating the perfect sleep environment will definitely help with baby sleep.”

Another mistake Kryz admitted committing was assuming that Scottie was hungry whenever he was crying when he was still a newborn.

“It was always feed the baby, feed the baby, feed the baby. And that fed into the anxiety in my head that maybe my milk is not enough. Why is he always hungry? And guys that is completely wrong pala. We just assume that the baby is hungry but a lot of times he is not. If you just fed him and his diaper is well, he could be crying for a myriad of reasons. He could just be uncomfortable, he [might] just want to be held, he [might] just need attention,” she explained.

READ: Kryz Uy opens up about journey of being a mother of two

Kryz also shared that not using pacifiers with Scottie was a mistake.

“I got advice from a lot of oldies,  aunties, moms, and midwives that we shouldn't use pacifiers or get the babies to use pacifiers because it could be so hard to wean them when the time comes. But the ‘Moms On Call Daily Schedule’ (a book) specifically said this is how you soothe your baby: ‘You jiggle the baby, you shush the baby, you pat the baby and if it does not work give the baby a pacifier.’ To kind of hold him off until his next feeding and to extend the time to when he's supposed to get his feedings,” she said.

Kryz said that allowing Sevi to use the pacifier has been such a big relief for her.

“That has been super duper helpful for us because instead of the baby wanting to suck on your boob for comfort, he can suck on the pacifier instead. Sucking is actually very calming for a baby, especially a newborn and so giving a pacifier isn't actually all that bad based on my research because if you give a baby a pacifier, if you want to wean him off you can just take it out,” she shared.

“But what we did with Scottie was we didn't give him a pacifier. We let him suck his thumb instead and that's even harder guys because you can't detach his thumb completely from his body and until now, he is two years old, he still sucks his thumb. But with a pacifier you can wean him out of it,” she added.