LOOK: Sandara Park back in Manila; spotted at the airport

Sandara Park is back in Manila. 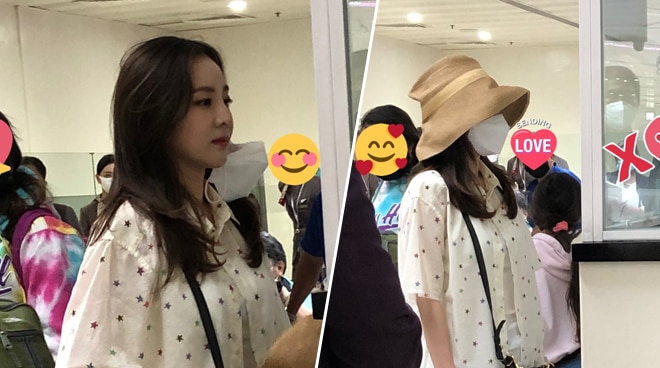 Our favorite Pambansang Krung-Krung is back in the Philippines — and eagle-eyed fans spotted her during her arrival in the country.

A fan with the Twitter handle @jltsrr shared a video of Sandara (or Dara to most of her fans) being escorted at the Ninoy Aquino International Airport (NAIA).

In the video, Dara can be seen waving to fans who eagerly waited for her inside the airport.

In another set of photos shared by the same person, Dara can be seen lining up at what appears to be the Immigration booth.

It is unclear what Sandara will be doing during her stay in the country, but fans believe she’s simply here for a vacation.

Dara rose to fame in the Philippines after joining the reality talent search Star Circle Quest.

After enjoying a successful career in the Philippines where she did various movie and TV projects, Dara decided to return to her home country, South Korea. She then became part of the South Korean girl group 2NE1.

Composed of Bom, Dara, Minzy, and CL, 2NE1 debuted in 2009 and became one of the earliest K-Pop groups to successfully penetrate the international market. 2NE1 is the group behind hits "Go Away", "Lonely", "I Am the Best", "I Love You", and "Come Back Home.”

In 2017, 2NE1 announced their disbandment and Dara went on to pursue solo projects.

Dara visits the Philippines from time to time to do shows and fulfill her engagements with different brands she endorses.

In 2021, Dara left her longtime agency, YG Entertainment, after 17 years.