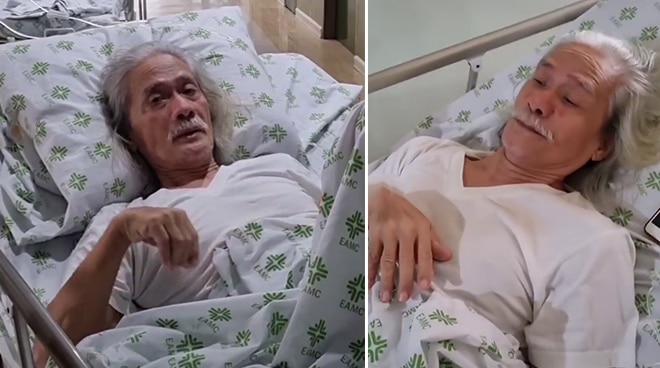 Known as one of the most prominent character actors in the country, Pen Medina's roles onscreen have continued to make a mark. Some of his most notable onscreen projects include his debut 40 years ago in the iconic Nora Aunor film Himala and his most recent work in teleseryes like La Vida Lena and A Soldier’s Heart in 2021.

This year, the 71-year-old actor battles a life-changing disease. He will undergo spine surgery this week, his actor sons Alex and Ping Medina shared in their social media posts on Saturday, July 16.

They wrote: “To his friends, relatives, and co-workers: Our dad, 71-year-old actor Pen Medina, has been in the hospital for three weeks now and currently cannot sit or stand up due to Degenerative Disc Disease (DDD). He is scheduled for a major spine surgery on Tuesday, July 19.”

In the same post, the Medina brothers revealed that their family had already exhausted their savings for Ping’s medical bills, forcing them to make an open call for charity.

“Due to the pandemic, our dad scarcely had any work, which siphoned his savings over the past two years. We are trying to help him as best as we can but it will be a long road to sufficient recovery for him. We humbly appeal for your charitable help and prayers as our family navigates through helping him get back on his feet - literally and figuratively. Maraming salamat”

For those who wish to extend financial help for Pen, his sons provided details the following accounts (QR codes are posted in the comment section) where people can dinate:

Aside from receiving numerous acting awards in the past, In 2017, Pen was also awarded the Nora Aunor Ulirang Artista Lifetime Achievement Award at the 33rd PMPC Star Awards for Movies. He was also part of ABS-CBN projects like 24/7, Ngayon At Kailanman, Ang Probinsyano, and Pasion De Amor.