LOOK: Sweet photos of Robi Domingo, fiancée after getting engaged

Robi Domingo has given fans a glimpse of how he proposed to his non-showbiz girlfriend Maiqui Pineda in Japan. 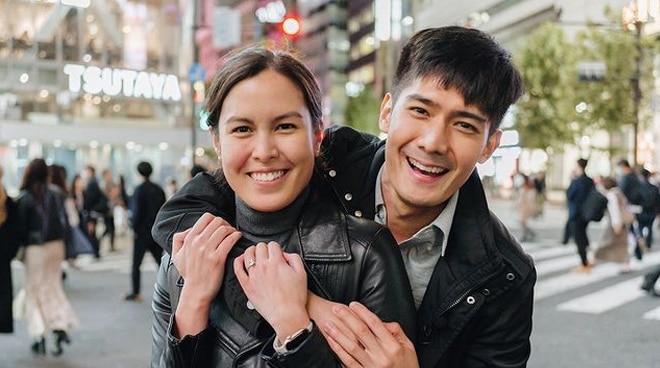 Robi Domingo gave his social media followers a glimpse of how he proposed to his non-showbiz girlfriend Maiqui Pineda during a trip to Japan last November 4.

On Instagram, Robi shared pictures of his proposal to Maiqui in the middle of the famous Shibuya crossing in Tokyo.

Maiqui also shared snaps of herself and Robi right after they got engaged. It had the caption, “GAME NA,” followed by a ring emoji.

Robi proposed to his fiancée during a trip to Japan with his showbiz friends Kathryn Bernardo, Daniel Padilla, Zanjoe Marudo, Ria Atayde, and Joshua Garcia.

Just days before he got engaged, Robi opened up in an interview on PUSH Bets Live his plans to settle down with his non-showbiz girlfriend.

“I think I’m ready to have that certain level up in our relationship. So, yes, napag-uusapan siya. Kasi nasabi ko din sa kanya ‘to a couple of weeks before, wala man akong market, may forever naman ako,” he said.

The TV host said he knew he was ready when he realized that Maiqui is “the one.”

READ: Robi Domingo opens up about long-term plan with girlfriend

“Kasi ako just think about it, kahit gusto kong sabihin na kinakabahan ako, mas nangingibabaw ang excitement ‘cause I know it’s going to be a fun journey with her.”

It was in 2019 when Robi, 33, publicly introduced Maiqui as his girlfriend. The two have been dating since August 2018.