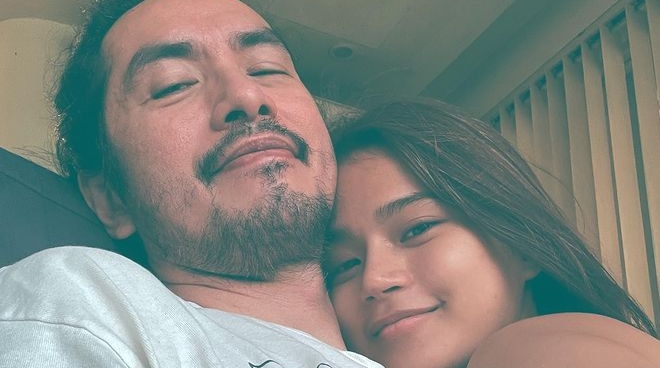 Her boyfriend, Rico Blanco, took to social media to greet her a happy birthday. On his Instagram page, the former Rivermaya frontman posted photos of Maris, including a rare snap of them cuddling, before sharing his short but sweet message for his "madam."

"happy birthday madam. love you so much po," he said.

It was last March when the musician couple made headlines after Maris's birthday greeting to Rico spurred rumors that they are romantically involved.

READ: Maris Racal did not expect the positive reaction to her relationship with Rico Blanco

Appearing on Magandang Buhay last August, the actress admitted that she feared the public's reaction to their relationship because of their 25-year age gap.

According to Maris, she and Rico have been romantically involved even before the start of the COVID-19 pandemic. When asked to describe the musician as a boyfriend, she said: "Simple lang si Rico na boyfriend. Hindi siya 'yung tipong araw araw nagbibigay ng bulaklak. Kaya every time na nagbibigay siya ng flowers, kinikilig ako kasi hindi siya ganun. Simple lang siya. So every time may ibibigay siya, kinikilig ako."

Rico, for his part, admitted that contrary to his low-profile persona in previous years, he has now become more open about his personal life, thanks to Maris.

"I feel kasi also we’re working in this space na she’s doing music, I’m doing music. She’s acting, she’s serious about her craft. So baka doon ako nakahanap ng area na siguro comfortable ako pag-usapan, because it’s not really a private thing, it’s about something that we’re both passionate about and so maybe 'yun yung window or 'yun 'yung doorway para mapag-usapan, 'yun 'yung something that might be considered private. I’d like to think that we still keep a lot of things private but we’re also excited to share when it’s about music or it’s about our art. So it’s not really difficult. I’m as surprised as you guys are," he said.