On Instagram, actress Riva Quenery shared photos from her second baby shower, which was held earlier this month at Kathryn Bernardo’s studio in Quezon City. 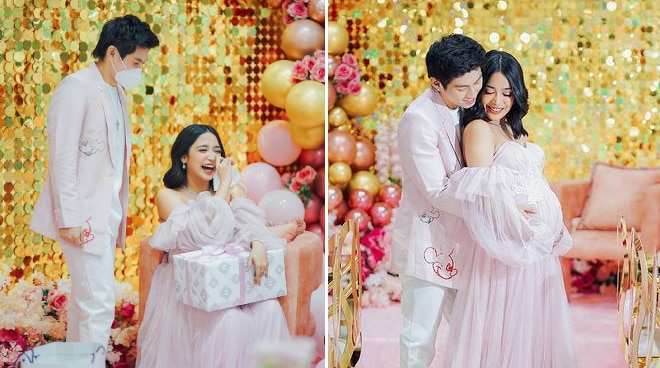 Actress Riva Quenery and her partner, Vern Ong, had yet another baby shower to celebrate the upcoming arrival of their first child together.

On Instagram over the weekend, Riva shared a series of photos from her second baby shower, which was held earlier this month at Kathryn Bernardo's studio in Quezon City.

"A shower of blessings, joy, and love!" she wrote in the caption.

"We still have so many fun memories from our baby shower!! Thank you again fam. I would also like to thank my dream team. I wouldn’t have changed a thing!" Riva also said.

In her latest vlog documenting her preparations for the party, Riva explained why she decided to hold another baby shower despite already having been thrown one by her The House Arrest of Us co-stars in June.

READ: Cast of ‘The House Arrest of Us’ reunites

It was on May 16 when Riva announced that she is expecting her first child with Vern,  who is one-half of the YouTube duo Ong Brothers.

In a recent interview with PUSH, Riva shared how her relationship with Vern changed after finding out about her pregnancy.

She also shared how their priorities changed after learning that they are going to be first-time parents.

During the interview, Riva also admitted that she and Vern have already discussed marriage plans.

Riva, 23, was last seen in Star Cinema's digital movie series The House of Us, which concluded in January.