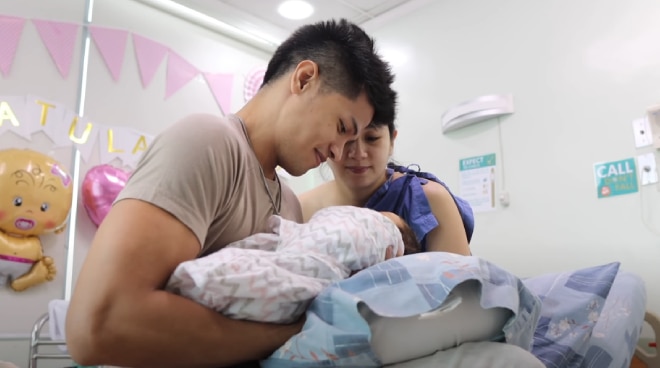 In their latest vlog, the two gave a glimpse of their baby, Avianna Celeste Abrenica, who was born last March 15 at 8:27 a.m. via caesarean section.

"What happened was 37th week checkup I was told na she was already 8 lbs. On my 38th week checkup, we were told that she’s already 9.2 lbs," shared Sophie at the beginning of the video.

"She’s a big baby, so it would be safer for us to deliver her via C-section—which is something that I was not expecting. I was hoping to be able to deliver normally but whatever will get her to this world safe," she added.

According to the couple, after she was born, Avianna had to stay in the neonatal intensive care unit (NICU) as her oxygen level declined without support.

"Avianna has to be in the NICU because they have to observe her, kasi her oxygen levels go down. And then when they did an x-ray on her lungs, parang there’s still water, which they say is normal when you’re caesarean kasi hindi masyadong nai-squeeze ‘yung baby. Plus it’s also normal for a giant baby," said Sophie of their daughter, who weighed 9.13 lbs.

Aside from their child's birth, the 13-minute vlog also chronicled Sophie's pregnancy.

In the video description, the first-time parents expressed how grateful they are for their "little angel".

"Baby A was born. It has been quite a journey...  Getting pregnant in the middle of a pandemic, and giving birth at the height of it a year after it all started. We were lucky that despite all the challenges and scares we went through, we were able to experience Baby A's birth together and she is finally here with us, safe and healthy. Our hearts are full of love for our little angel," they said.

It was on Valentine's Day when Vin and Sophie, who have been together for more than eight years, announced that they were expecting their first child.

Their announcement came just a week after the couple revealed that they were now engaged.