Former actress Nadine Samonte and her husband Richard Chua celebrated their eighth anniversary as a married couple over the weekend. 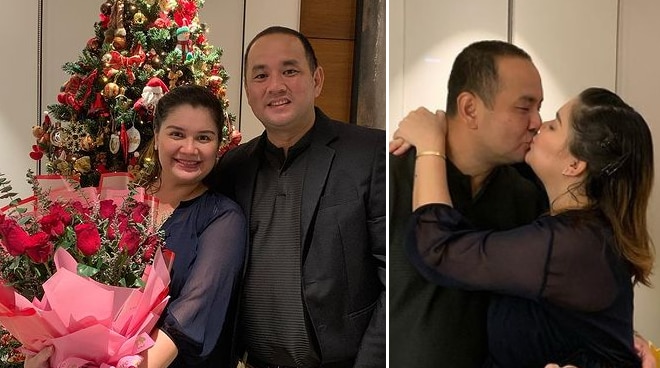 Former actress Nadine Samonte and her husband Richard Chua celebrated their eighth anniversary as a married couple over the weekend.

On Instagram on Saturday, October 30, Nadine shared that for their anniversary, her husband set up a fancy dinner date at home since it was too risky for her to leave the house because of her pregnancy.

"About last night. My husband hired a chef and cooked na lang sa house since I can't go out because I'm preggy para safe. So sweet of you my love. So nagbihis na lang kami and felt nasa resto kami hehe," she wrote in the caption.

"Salamat mahal ko. 8 years with you was amazing. Happy anniversary my love. Love you so much and the kids. You are my life @rboy_chua. PS. Gwapo ng asawa ko," she also said.

But it turns out it wasn't only Nadine who was treated to a romantic evening; on his Instagram page, Richard also shared photos of a separate dinner date his wife prepared for them at home to celebrate their latest milestone as a married couple.

"When you thought your anniversary celebration was over. Then all of a sudden your wife surprises you with this and playing in the background was your theme song 'Dying Inside.' Happy anniversary indeed! LOVE YOU," he captioned the photos.

In an interview on Magandang Buhay, the couple revealed that they met through Richard's mother, former actress Isabel Rivas, whom Nadine worked with on a show.

Just after a week since they first met each other, the two officially became a couple—something the StarStruck alum never imagined would happen, given that she is what she described as the conservative type.

Nadine and her husband eventually tied the knot in a private ceremony in Zambales in October 2013. Since then, they have welcomed two children together—Heather Sloane, who turned 5 last August, and Austin Titus, who is two years old.

Last June, the couple announced that they are expecting a new addition to their family, which turned out to be another baby girl.  According to Nadine, they are expected to welcome their third child this coming November.