In a lengthy Instagram post, actress-model Sam Pinto said she gave birth to her first child via normal delivery after 16 hours of labor. 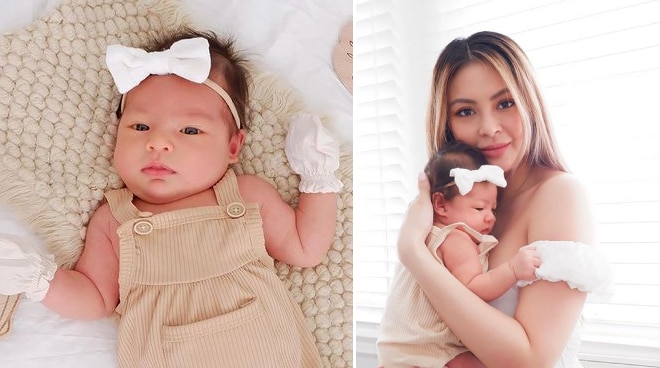 Over a month after giving birth to her daughter Mia Aya, actress and model Sam Pinto recounted her birthing experience, saying the entire process was both overwhelming and intense, "but my body is made for this."

In a lengthy Instagram post, the former Pinoy Big Brother housemate said she gave birth to her first child via normal delivery, after 16 hours of labor and a few pushes.

"Time to share my birth story! I was 40 weeks and 3 days pregnant when we decided to check in the hospital. We wanted to go for a normal delivery as much as possible — which I did. But there were some issues that can make me have a C-section," she wrote. "Like I was pre-eclampsia — or some reason I developed hypertension during my pregnancy even if I think that’s the healthiest I’ve ever been. Maybe cause my mom also was pre-eclampsia.

"Secondly, Mia was small. When I was 36 weeks pregnant, her size was 32 weeks. Had to drink these special vitamins and in 2 weeks, her size was perfect. Lastly, my placenta was low for the longest time. It’s supposed to go up early on the pregnancy. But mine took its time. Finally, on my 36th week, it went up. Oh if it doesn’t go up, I would have to do a C-section cause it’s blocking the birth canal."

Sam recalled feeling nervous and overwhelmed with anticipation during labor, as she didn't know what to expect from the experience.

"But I was already feeling some weird throbbing and didn’t know that was already contractions and was in the first stage of labor," she said.

She also revealed that her husband, professional basketball player Anthony Semerad, didn't stay with her in the hospital while she was in labor, as she didn't want him to be too exposed to the coronavirus.

"I was alone the whole time — honestly I didn’t mind... at least no pressure. Had my phone with me to keep me entertained. Plus I was on epidural so I kept dozing off," she added.

However, she said Anthony was there in the delivery room when it was time for their daughter to come out.

"Finally, after 16 hours, Mia was ready to come out. And Anthony was able to enter the delivery room. After 3 pushes, she was out! Anthony cut her umbilical cord. Stayed in the hospital for technically 3 days. 1 day for labor and 2 days for recovery room," she said.

In the end, Sam expressed her gratitude to all doctors and nurses, and saluted her fellow mothers as she stressed that giving birth is no easy feat.

Just last week, Sam finally gave her fans and followers a glimpse of their baby daughter, as she shared pictures from their first official family photo shoot.

Sam and her husband tied the knot in a civil ceremony at Conrad Manila in Pasay in March.

Months later, in May, the couple revealed that they were expecting their first baby. They then welcomed their daughter on September 1, 2021.