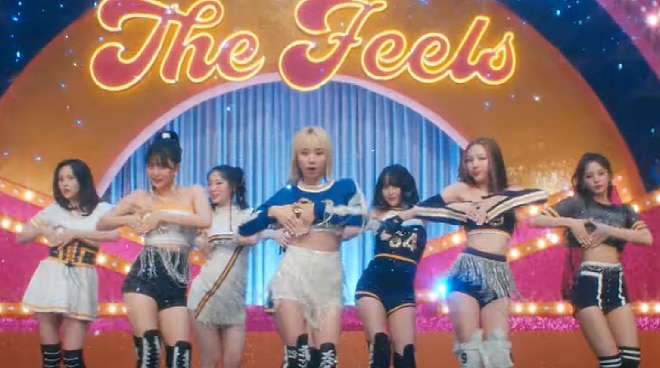 Also included in the MV is an announcement of TWICE's comeback schedule. According to the poster, the group's sixth anniversary week will be celebrated this October 2021, while their third full album is to be expected in November. Likewise, a fourth tour is also forthcoming.

Aside from YouTube, fans can also listen to “The Feels” through Spotify, Apple Music, iTunes Store, and Amazon Music.

But while “The Feels” is TWICE’s first official all-English language song, the group has already released English versions of their previous singles “I Can’t Stop Me” and “More & More”. Both songs came out last year, with “I Can’t Stop Me” being part of their second full album called Eyes Wide Open. “More & More”, on the other hand, is part of their ninth extended play of the same name.

Just last June, TWICE released their song “Alcohol-Free” as part of their 10th mini album titled Taste of Love. They also performed the song on the American talk show The Ellen Show.

Composed of Jihyo, Nayeon, Sana, Tzuyu, Momo, Mina, Dahyun, Jeongyeon, and Chaeyoung, TWICE is the hit maker behind the chart-topping songs like “What is Love?”, “TT”, “FANCY”, “YES or YES”, and “LIKEY”, just to name a few.