Sharon Cuneta finally gave her fans a glimpse of her watch collection. 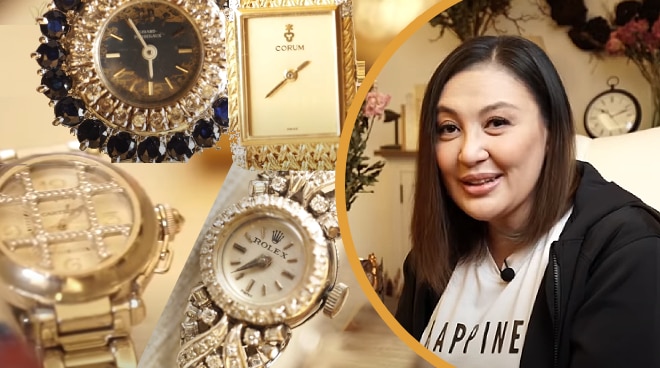 Sharon Cuneta decided to take out of the vault some of her most valued pieces from her vast collection of timepieces to give her followers a glimpse of the things in life she considers important.

Thanks so much!❤️😘☺️🙏🏻⭐️💎 Repost from @retrosharon • Beautiful & Cute at the same time until very now. No doubt! @reallysharoncuneta

A post shared by ActorSingerPresenter (@reallysharoncuneta) on Aug 31, 2020 at 7:12am PDT

According to the Megastar, part of the reason why she decided to do a vlog about it was that she has been getting a lot of requests from her fans for years now.

“It's no secret that I've always been a big watch collector and since many of you have been requesting for this, I wanted to share some sentimental pieces and also the stories behind them,” she said.

WATCH: Sharon Cuneta shows how she does her makeup

A known watch collector, Sharon Cuneta shared stories behind the timepieces, which include a 1950s vintage Rolex, a vintage 1970s Corum, a vintage 1950s Girard-Perregaux, a Ballon Bleu de Cartier, and a number of personal Rolex watch collection.

The 54-year-old actress made it clear that she didn’t want to brag about them but rather give her fans a look at what she described as “sentimental pieces.”

Remember that though we may think we have much more time to do all that we want to, we never really know what tomorrow will bring. Live every single day to your fullest, as if it were your last, yes, even as we go through COVID19 - we still have lives to live, right? Might as well do what we can, while we can. To be happy, and tell those we love just how much they mean to us. Please keep swiping left. Thank you, my Yani @bayaniagbayani for sending me this. I miss and love you, my friend.❤️🙏🏻💖😘🌸

A post shared by ActorSingerPresenter (@reallysharoncuneta) on Aug 15, 2020 at 9:22am PDT

“Well, this is my collection, and part of it, and that not to brag, that’s the truth, and that’s my life, and so I’ve shown you some sentimental pieces and why they’re important and some just because I love them. So I hope you enjoyed that,” she said.

Sharon said she dedicates her vlog to all her bashers, which she revealed also played a role in her decision to do a vlog about her watch collection.

“Sa bashers, this is dedicated to you because it all started with my famous — I did not include it here, but it’s just there you might be saying I don’t have it — that one Gold Rolex watch that I posted in Instagram. And since that’s where this all started, so we gave it everything now. So this is for you,” she said.

Then again, she also dedicated her vlog to all her longtime fans who have been asking her to do a vlog about her watch collection for years now.

“But more than anything, this is for my Sharonians, who, back when I started in Twitter sometime 2012, were already asking ‘Please show us your watch collection.’ So I hope you enjoyed this and that it helped you get to know what means a lot to me also another side of me again,” she said.