Jimuel Pacquiao responded to the misconceptions the public has about him. 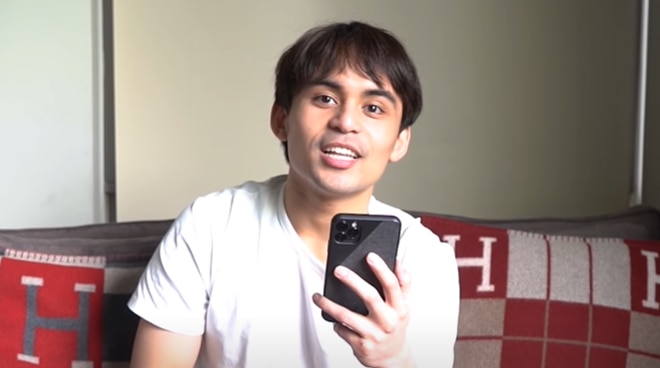 For his latest vlog, son of boxing champ and Senator Manny Pacquiao, Jimuel Pacquiao took the time to answer most of the assumptions about him from the public.

Jimuel, who was told by a netizen that he looks like a playboy, denied being one as he revealed that he had three serious relationships in the past.

Revealing that he has been single for quite some time now, Jimuel added that he is not in a rush to jump into another one.

“Actually, it’s not true. I’d say I’m not a playboy. I’ve been with like 2 or 3 serious relationships. I’ve been single for actually a while now. More than a year na and I haven’t jumped into anything yet kasi you know I’m not in a rush,” he said.

Sharing what he learned from his parents when it comes to relationships, he stated: “I take it very seriously and sinabi rin ng parents ko na it’s not a joke. Hindi siya biro. The right person will come. Kung darating, darating din.”

Jimuel also responded to a comment from a netizen lashing out hurtful words at him saying he tends to be snobbish.

The 18-year-old celebrity defended himself saying he’s just a shy type of person.

“Siguro people just mistake it talaga na suplado ako. Kasi honestly I’m just very shy talaga when it comes to meeting new people. It takes a while for me to get comfortable with the person. Nagiging madaldal ako ‘pag close ko na. I don’t know what made you think na ganito ako but like hindi talaga ako ganito,” he said.

Jimuel also answered one of the misconceptions always thrown at him — that he brags about everything he has to the public.

“Siguro this is because may videos ako about my car, my shoe collection, and basically how my life is. Pero I can tell you guys na I’m not bragging about it talaga kasi I know naman na eveything I have, my dad worked really hard for it. He probably worked his whole life to get what we have now,” he stated.

He also said he feels thankful for his dad whom he said made it possible to make them have everything they have right now.

“And yeah, I’m just very blessed to have what I have and to have a dad like him that really works hard for us every day. You know especially sa boxing, it’s really, really, really hard. It’s like he risks his life to fight para sa amin,” he added.

Jimuel went on to say that he often shares what his life is like on his YouTube vlogs because his fans asked for it and that it’s his way of showing his reality.

“So like we’re very, very thankful. Yeah, and most of my videos naman, requested by you guys. It’s just for me to show din na what my life is like. And like this is my reality. Ganito ‘yung buhay ko. And I’m just sharing with you guys. It’s not that na gusto ko magyabang. All these things naman, for me, blessings lang talaga ‘to. If God wants to take it away, then He can take it away,” he said.

Jimuel Pacquaio is one of the five children of Manny and Jinkee Pacquiao.