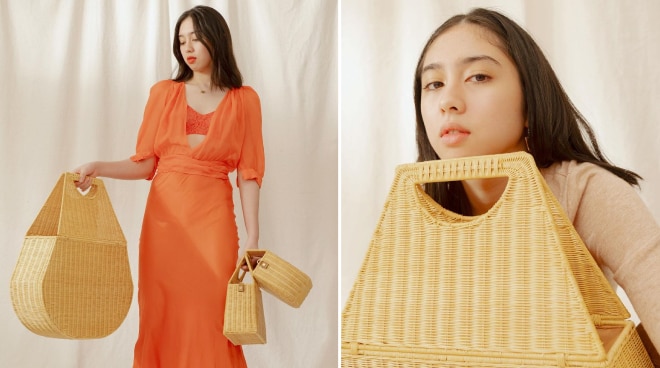 Actress Dimples Romana is one proud mother as her 17-year-old daughter Amanda “Callie” Ahmee launched her very own business called Cal The Brand.

In a virtual press conference held on the same day, Callie recalled going to bazaars with her mother, inspiring her passion for locally made products. “I wanted to expand that market that was already there and elevate the initiative of some people to support local and bring more awareness to them and their products,” she said.

“The designs that I’m selling now, they went through so many revisions. At first, I was supposed to do it with PVC, like a more modern take on banig bags. It just ended up here to a natural, clean slate of rattan bags. They’re premium rattan, and they’re just plain right now but I’m coming up with collections that have more color and more flair to it but I just wanted to have a base and give people an impression of what I’m doing and what I’m going from,” she also shared, adding that she worked with local artists for this venture.

Talking about where she took inspiration from, Callie said, “My idea for bags was to reinvent those abaca bags that people would always sell. They were circular, right? [They were] hand bags or sling bags or really big totes. And I just wanted to make a collection that’s very versatile and perfect for any occasion that there’ll be.

“I feel like there was an impression that these bags were only perfect for the beach or [for] casual wear, and I really wanted to change that so I think I based the designs on that idea. And, these shapes, I feel are sleek and sophisticated enough to bring to a dinner party, and simple and the perfect size for a casual walk to the park or a casual trip to the mall,” she added.

Meanwhile, Callie is currently developing three more collections that are “very different” from her first release. According to her, she will be releasing fashion items with unique fabrics. She also said that she would be exploring more products in the future, “The future collections, which of course aren’t limited to fashion items only, I’m also exploring home items, furniture, novelties, and hopefully, I’ll go into art soon.”

Callie is Dimples and her husband Boyet Ahmee’s first born. The couple also has a son named Alonzo.