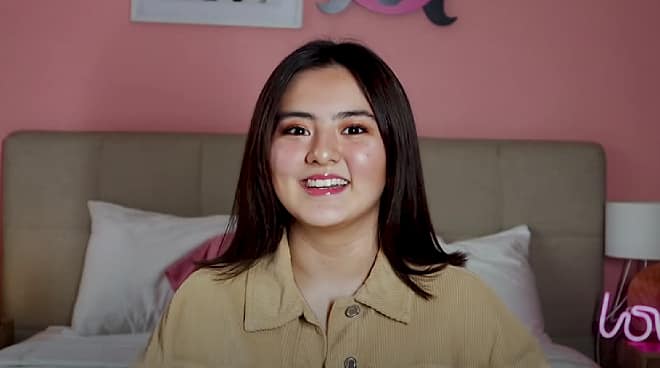 After creating her own YouTube channel, Cassy Legaspi, daughter of actors Zoren Legaspi and Carmina Villaroel has finally shared her first vlog with the title, My First YouTube Video Ever! The 19-year-old twin sister of Mavy Legaspi started of her solo vlog admitting she was a bit nervous and shared that she wanted her fans to be able to get to know her more by answering questions posted by fans on her Instagram account. “I’m so sorry if I’m so awkward. I need to stop this rambling (laughs),” she said.

Cassy revealed that she had been wanting to make a YouTube channel ever since she was 12 years old or when she was still in grade six. “Kitang kita naman. I’m super talkative. I’ve always been addicted to YouTube. I watch YouTube every single day. I even like the weird videos. Friends and family have been telling me to make a YouTube channel. ‘People are going to be so entertained because you can talk about anything.’”

Cassy also said that she finally made the decision to start vlogging while doing home quarantine. “I realized that this is something I want to do so let’s try it out. There’s no harm in trying right?”

During her Q & A vlog, Cassy revealed that she just transferred schools and is now taking up a course in Marketing. “I’ve always been interested in business but I like the creative side of Business hence Marketing. You know guys, don’t underestimate Marketing. It’s very hard but it’s something I like to do. So it’s fun,” she explained.

The bubbly teen also shared that she was supposed to start working on her first teleserye this year but the project was put on hold because of the pandemic. “Obviously I had to prepare for that and I want to come prepared. Physically, I just work out and eat healthier. When artistas have taping, napupuyat sila. So they need to keep their immune system very, very healthy so they have energy to do different kinds of scenes. And from what I see from my parents, the first scene in the morning can be very happy and then in the next scene you’re crying and then the next scene you are happy again. There’s like highs and lows everyday so you need to be able to be strong physically, “ she said.

To prepare for her first regular role on television, Cassy said she went through acting workshops. “It helped big time but I also practice at home, the emotions and stuff to see how I look when I’m crying and how I look when I’m happy. And then I read my parents’ scripts and I practice my Tagalog because I’m not really fluent in Tagalog, “ she admitted.

When not at work, Cassy said she loves focusing on her school work. “It’s really fun to me. I’ve been reading a lot recently. I try my best to reconnect with my friends. I video call them. I’m pretty simple. I’m just chilling, you know,” she shared.

Before ending her first vlog, Cassy called up her good friend and singer Darren Espanto who is currently in his hometown in Calgary, Canada.

Her friends also dropped by her YouTube channel to make some comments and show their support.

“Oops..hehe, Thank You so much D!!” Cassy replied.

This exchange set off CassRen fans who asked for a collaboration between the two.

Aside from Darren, good friend Kyle Echarri also had something to say.

“I’m offended that I didn’t make the cut Cassandra,” he joked.

As of this writing, Cassy’s channel has 15,900 followers on YouTube.