Assunta de Rossi took to social media over the weekend to introduce her newborn daughter. 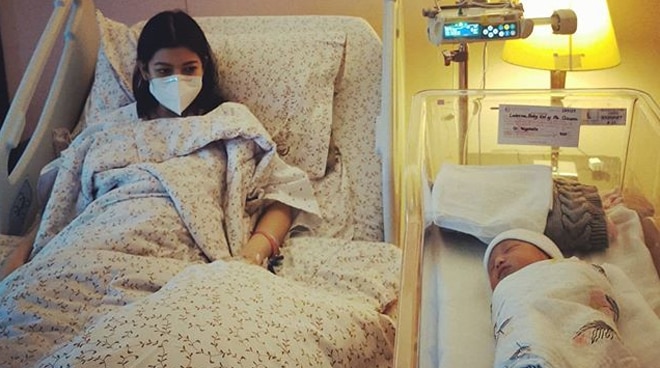 Assunta de Rossi took to social media over the weekend to introduce her newborn daughter.

At 37, the actress gave birth to her baby girl with her husband Jules Ledesma on Friday, October 23.

In her caption, the first-time mom explained the meaning behind her daughter's name.

"So there you have it! I hope she knows how much we wanted her," she added.

This is the most beautiful photo for life! Little Fiore and tears of joy in my sister's eyes. ❤️🥺🙏🏻 Almost 20 years in the making! Miracles happen every day, and this one is the best! Congratulations @assuntaledesma @julesledesma ❤️ and of course to the new granny na mas oa pa sa naganak, @ermatsko 🤣🤣🤣 THANK YOU LORD 🙏🏻🙏🏻🙏🏻

Our bundle of joy🎀 To hug and to hold from this day onward.... 🌈🌈🌈 Meet Giulia Fiorentina Alessandra Schiavone Ledesma Nickname: Fiore. Lola nako😍😍😍 Thank you Lord for this wonderful gift of life! Thank you @julesledesma for loving this beautiful #neomamma and to you Fiore, welcome to our world!!! #aflowerhasblossomed #anewmotherisborn #ourflowerfromheaven #theflowerestofthemall #allrightsreserved

You give me hope.

Last May, Assunta made headlines when she revealed that she is pregnant, after nearly two decades of trying to conceive with her husband.

In an Instagram post, Assunta, who was on her 14th week of pregnancy at that time, shared that she went to see her doctor last March 5 after she missed her monthly period.

“An ultrasound scan and blood test confirmed later that day that I was about 5 weeks pregnant. I know, shocking!” she said.

“Getting pregnant the natural way with myoma and endometriosis (which I both have) is extremely difficult. Only medical intervention or a miracle can make it happen. This was a miracle!” she added.