‘We’re not trying to be K-Pop’: MNL48 wants to put spotlight on Pinoy music on the world stage

ABS-CBN execs gave MNL48 a warm welcome as they renewed their contracts with the Kapamilya network. 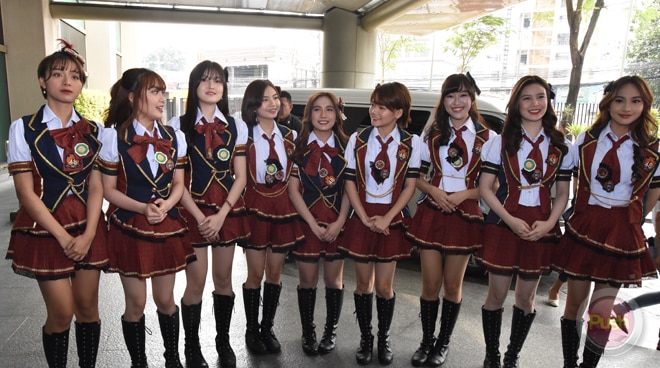 fter signing their contract with ABS-CBN, three members of the group MNL48—namely Abby Trinidad, Sheki Arzaga, and Sela Guia—faced the press to express their gratitude after getting a warm welcome from the Kapamilya network.

MNL48, who signed with Star Music after their stint on It’s Showtime, revealed that exciting adventures lie ahead of them now that they are officially part of the ABS-CBN network.

Meanwhile, MNL48 said they feel thankful to be recognized as an idol group in the Philippines.

“I guess bawat grupo naman po may kanya-kanyang characteristics and weakness and strengths. Kaya naman we’re very glad kasi na-rerecognize na po kami ng Philippines as like really an idol group such as MOMOLAND and BLACKPINK. But we’re not trying to be K-Pop,” stated one of the members.

Then again, the girls dismissed the comparisons made between them and the girls of MOMOLAND.

“There’s no comparison between the two naman po. And kasi different goals naman. We have that one goal - to make other people happy and inspire sa performance namin. And mapakita ‘yung pagka-Pinay and kung paano po ‘yung Pinoy and ‘yung song na Pilipino,” another member of MNL48 said.

Now ready to conquer the world stage, MNL48 said they want to put the spotlight on local music.

The girls also said that the show will still push through. But this time, it will be held in a different place after Star Theater, the original venue, was hit by fire recently.

Abby Trinidad, on the other hand, shared that the upcoming live-action film adaptation of the manga series Seikimatsu Blue which she is slated to star in, is set to come out in 2020.

She went on: “It’s about a family and friend story - monsters, something like that. ‘Yung mga taong mahilig sa anime, magugustuhan nila ‘to. It originated from a manga story.”