Four ‘old but gold’ Filipino horror movies from the ‘90s

Are you in for a horror movie marathon? Check out these recommendations. Halloween has become an annual event that people look forward to. Aside from the parties and the Trick or Treat activities, it is also the time of the year when television stations show programs that feature horror stories.
As for this year, ABS-CBN will air a compilation of the former news and current affairs program Magandang Gabi Bayan’s Halloween specials. These episodes used to be such a big hit during the ‘90s that netizens expressed how much they miss them now.
Here are some old-fashioned horror movies to bring back that nostalgic feel.
1. Magandang Hatinggabi 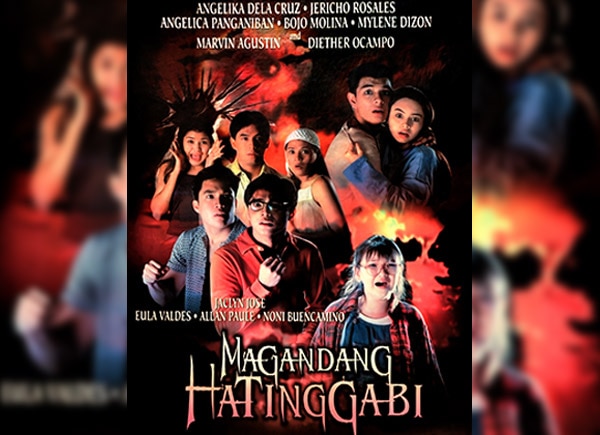 Shown in 1998, Laurenti Dyogi’s horror-comedy Magandang Hatinggabi has three connecting stories. It all starts when a group of friends composed of actors Marvin Agustin, Diether Ocampo, Bojo Molina and Mylene Dizon, among others, get lost in the middle of nowhere, in the middle of the night. This forces them to stay at a bar where they meet the character of Noni Buencamino who will tell them about two urban legends. The first story is about a killer van while the second one is about the aswangs. Unknown to the squad, the third story is about them. This movie also starred Angelica Panganiban, Jericho Rosales and Angelika dela Cruz.
2. Shake, Rattle and Roll II

This second installment was released in 1990.
The first story is about a doctor (played by Eddie Gutierrez) who possesses a man (played by Eric Quizon) who is with his wife (with Janice de Belen) on his honeymoon.
The second is about escaping the wrath of a voodoo witch (played by Daisy Romualdez). It starred Joey Marquez, Carmina Villaroel, and Sylvia Sanchez.
The last story featured Portia (played by Manilyn Reynes) who was invited by her friend (played by Ana Roces) to their barrio for a festival. Unknown to her, this barrio is inhabited by aswangs who will use her for sacrifice. Realizing this, Portia plots an escape which had the aswangs kill their daughter instead of her, infuriating them.
3. Shake, Rattle and Roll VI Considering the sudden hype of killer clowns nowadays, the sixth Shake, Rattle and Roll installment comes timely as one episode was about a clown who comes out of a television and forces a young girl (played by Camille Prats) to join him in his world.
The two other episodes starred Aiza Seguerra, Matet de Leon, Tom Taus, Ara Mina and Tonton Gutierrez. This was released in 1997.
4. Patayin sa Sindak si Barbara Although this movie has been recreated many times, the 1995 Patayin sa Sindak si Barbara version starring Dawn Zulueta, Lorna Tolentino, and Tonton Gutierrez, remains to be a memorable one.
The movie is about sisters Ruth and Barbara who fall in love with the same guy named Nick. Although Nick married Ruth, Ruth still felt jealous and neglected by her husband. Hence, she committed suicide and haunted the living to take revenge.
Celebrity