Marc Nelson and Rovilson Fernandez recall how they passed grueling auditions to host ‘Asia's Got Talent’. 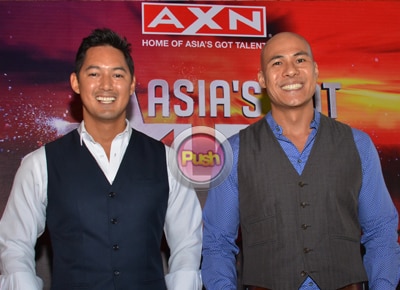 After making a surprise announcement on his Instagram account last January 23 about hosting Asia's Got Talent with Rovilson Fernandez, Marc Nelson revealed that getting the job was not as easy as he thought. “It was quite a long drawn out process and we were up against some of the best, brightest, talented folks not only throughout the region but throughout the world so we're extremely flattered first of all to be included in the same company as them in auditioning for the show. And to actually get it, that's huge,” he shared.
Rovilson admitted it is still sinking in that they are hosting the biggest talent search in the world. “Marc and I can attest that it wasn't easy getting to where we are today. We are flabbergasted, amazed, flattered and just really, really happy. And it's an absolute honor to be representing the Philippines. Because being with the best and brightest people in the region, these are the people who we watch on TV and to be representing the Philippines in an international show, we just couldn't be any more delighted for that. It was tough auditions,” he added.
Asia's Got Talent, which will start airing on March 12 on the cable channel AXN is also the same network which is home to The Amazing Race Asia which the pair joined in 2007. The two admit they are still overwhelmed with how grand a production the show is. “Our cameraman was British, our sound guy was Malaysian, our director for photography is Australian. So they've basically taken the best of the best and flown them all in to work on the show because it is such a big deal,” Marc shared. The lineup of judges for this season is also a who's who in showbiz starting with 16-time Grammy awardee David Foster, former Spice Girl Melanie C., Indonesian rock icon Anggun, and Taiwanese-American pop idol Vanness Wu. “Even though they are absolute superstars sobrang bait sila. They will look you in the eye when they speak with you. They will give you all their attention one hundred percent. They're very, very nice. They don't act like their superstars. They're very accessible, very humble, open door policy, they're great. Interesting fact, Melanie C. actually has family in the Philippines,” Rovilson said.
Marc shared he admires that out of all the judges, it is Canadian musician David Foster who has really made an effort to connect to them as hosts. “They are a wonderful, wonderful group. They are all wonderful people. We had an opportunity to talk to them on-cam and off-cam and they are a great bunch. And we really like how David Foster really goes out of his way to include us, even if he's sitting down there in the judges corner, he'll throw a question to one side of the stage. They are great,” he explained.
Rovilson admits that the Pinoys are well represented in the competition but viewers will have to tune in to the show to find out more. “There were some Filipino acts and they were very impressive. We can't say anything else regarding that but you will be proud as Pinoys, you will have something to root for.”
Having been friends for a long time, the two hosts admitted their camaraderie is a big advantage in working in showbiz. “It's definitely an advantage so it's like working with friends. You can just bounce off each other quite naturally, you have similar sense of humor and there's just that instant comfort level of working together. And the great thing about this show is we have some really long hours but it feels like so much fun. At the end of the day everyone says, 'Wow that was a long day' but we're just like 'That was great fun!'” Marc admitted.
Rovilson said their friendship makes their tandem more fun to watch on the show. “It just doesn't feel like work basically. When I host with other hosts it feels like work. But when I'm with Marc it's just like, 'Hey let's hang out!' and our main goal always is just to have fun. And if we're having fun on stage then it resonates into the audience,” he said.
With Asia's Got Talent being the 63rd adaptation of the Guiness World Record-breaking hit Got Talent format created by Simon Cowell's Syco Entertainment and co-produced by Fremantle Media, it has become officially the most successful reality TV format in history and currently airs in 186 countries.  “They've got franchised in 65 different countries. It's a very well-known brand. You're going to see people form completely different countries, completely different cultures all competing on the same stage. You've got not only different cultures but different languages. This is being aired to 400 million households all over the world which is just enormous,” Marc admitted.
Watch the four judges select the most jaw-dropping, mind-blowing, and breathtaking performances on Asia's Got Talent starting March 12, airing on Thursdays at 8:05 pm. Catch it on AXN, Channel 49 on Skycable.
Celebrity